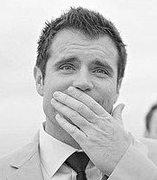 I loved this collection of photos by a redditor poster featuring reactions of grooms upon the first site of their brides.  The expressions range from tears to exclamations of joy to “I’m tearing that dress off before we get to the reception.”

Waterstones bookseller found trolling self-published author – David Eckhoff left advertising material for his self published book, available via Amazon, in the Bluewater branch of Waterstones. Staff there did not appreciate that and retaliated by leaving several negative reviews. Apparently the authors of the reviews could be traced back to Waterstones.Guardian

A spokesman for Waterstones said that the leaflets Eckhoff distributed in the Bluewater branch were encouraging customers to order his book from “a major competitor” – Amazon. If the leaflets had just been about his book, then obviously they would still have been looked for and removed (not a great use of staff’s time…) and we’d put it down to an over-enthusiastic new author. But including the encouragement to use a major competitor is just rude and surely obviously inappropriate, which is what prompted a polite email to the author asking him not to use our shops in such a way,” said the spokesman. “Unfortunately, it subsequently emerged that staff at the shop had taken matters into their own hands and indulged in some completely inappropriate behaviour, as pointed out to us by the author. We took action to identify those involved and have the offending material removed, and dealt with the situation accordingly, and of course we are sorry that members of our staff acted in such a fashion.”

Crowdscribed – Want to be a beta reader? or a cover designer? copy editor? Well, you can in Crowdscribed’s newest publishing venture. And, in exchange for your contributions, you can receive a monetary award or “prizes” as set out by the author seeking your input. Crowdscribed

Knocked Over: On Biology, Magical Thinking And Choice – This is a thought provoking essay of a forty year old single woman without a great career and no steady boyfriend who suddenly finds out she is pregnant. She thinks about keeping it, abortion, the costs of not only raising the child but just birthing it. (She had no insurance at the time). It’s like in order to have sex, you have to have medical insurance, just in case, as well as a dozen different prophylactics else you’ll be deemed irresponsible. This might have been a response to the Washington Post opinion article that the common view of women is that they are all mothers in waiting. Certainly romance books treat women in that fashion. Even the Center for Disease Control does: The [CDC[ said all American women — from the time of their first menstrual period until menopause — should take folic acid supplements, not smoke, not “misuse” alcohol, maintain a healthy weight, refrain from drug use and avoid “high risk sexual behavior.” The CDC was asking women to behave as if they were already pregnant, even if they had no intention of conceiving in the near — or distant — future. The Rumpus.net

Are the Paralympics a celebration of superhumans, or a modern freakshow? – Are the paralympics a paternalistic extension of the traditional circus sideshow or a celebration of superbeings?  Determination and skill is being augmented by emerging prosthetics. On Sunday, Oscar Pistorius, who ran in the Olympics, was defeated in one race during the Paralympic Games. He decried the opponents’ use of longer blades.  I’ve been amazed at the prowess of these athletes who’ve overcome their handicaps. To me, their triumphs are all the more amazing given the distance they have had to travel.  i09

→ Jane
Previous article: Daily Deals: A YA that is deemed the devil’s work; a sexy PI; and drunk knitters
Next Post: REVIEW: A Bad Day for Voodoo by Jeff Strand