Amazon patents resale marketplace for used e-books, songs and other digital goods – ReDigi set up a secondary marketplace for digital music. Capital Records, amongst others, have sued ReDigi for copyright infringement. Both parties made arguments to the court which will largely dispose of the case back in October. As of yesterday, no decision has yet been rendered.

As I wrote last September:

Using ReDigi’s software, an “eligible file” is moved from the harddrive of the user to a ReDigi storage locker. The user can then stream, download or offer the “eligible file” for sale. Eligible files are determined to be music purchased directly from iTunes. No tracks copied off CDs or downloaded from other vendors or fileshares are permitted to be offered for sale. The user can only sell that eligible file once on ReDigi.

To use examples, if I buy “Stronger” by Kelly Clarkson from Amazon, I can’t resell it using ReDigi. If I buy the song from iTunes, I can but I am only allowed to sell “Stronger” once.

When the sale occurs, ReDigi transfers access to the song from the buyer to the seller. ReDigi’s software continually scans the harddrive of the buyer to make sure there are no copies of the song. If ReDigi finds a copy, it prompts the user to delete it. If the copy is not deleted, ReDigi suspends access to the user’s entire ReDigi account. ReDigi argues that in this way, no actual copies are made because only one copy exists on ReDigi’s storage locker and the users are simply buying and selling access. This is what is contemplated by the Australian company Book.Ish and what is actually taking place in the online cloud based videogaming world Steam.com.

Amazon applied for a patent for a resale marketplace for used ebooks, apps and songs in 2009 and was awarded the patent on January 29, 2013. The patent, which Amazon filed in 2009 and won on Jan. 29, imagines a digital resale marketplace where users can trade “digital objects” like e-books, songs, videos and apps. According to the patent, these items would live in the user’s “personalized data store,” presumably in the cloud. Selling a song would copy it to another user’s data store and delete it from the original owner’s. “ The Washington Post 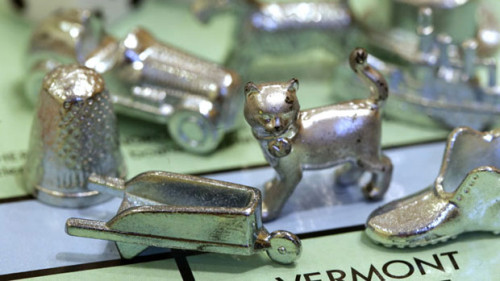 Monopoly fans vote to add cat, toss iron tokens – Out with the iron, in with the cat. “Scottie dog has a new nemesis in Monopoly after fans voted in an online contest to add a cat token to the property trading game, replacing the iron, toy maker Hasbro Inc. announced Wednesday.” Associated Press

iTunes launches Breakout Books section to highlight self-published titles — Apple is starting to explicitly promote low cost self published books.  A new section of the iBookstore is labeled “Breakout Books”, a selection of self published titles.  Currently the titles are basically the ones that top the leaderboards.  This will only be interesting if Apple actually introduces new and unknown self pubs instead of relying on the numbers to push books into the “Breakout Books” section. Unfortunately, Apple says that the content will be populated by books “taking off” and those are titles a reader can find on any bestseller list.   PaidContent