The Durham County Library is hosting a romance reader festival.  If you live in the Triangle area of North Carolina, check it out.

Male Contraceptive Pill One Step Closer – New Method to Stop Sperm from Reaching The Ovule Discovered – Honestly I can’t wait for the male pill. Not because I would trust a guy to regularly take one but because of the story lines it will create.  He won’t need to know if she is on the pill. He’ll only need a promise that she is clean. Doctor Tipster

“According to precedent studies, almost 55% of the patients questioned are willing to try the male contraceptive pill. However, a recent study from the United Kingdom, published in 2010, reveals that women don’t trust that men would take the pill on a daily basis. There are currently other forms of male contraception, which includes a monthly injection. It’s based on testosterone and the result is the regulation of two brain chemicals that temporarily block sperm production. According to a clinical trial conducted in China, which involved 1,000 male patients, over a period of two years, these injections were proven to have an efficiency of preventing pregnancy of almost 95%. However, 30% of the patients stopped participating in the clinical trial due to side effects which included acne, mood swings and a lower sex drive.”

NYU loses years of scientific research and thousands of mice to Hurricane Sandy – Sandy’s devastation will be measured for months to come. One unforeseen and terrible result was the loss of scientific research. Re-agents and genetically altered mice were lost either to flooding or loss of power.NY Daily News

“Many precious reagents — special enzymes, antibodies, DNA strands — generated by scientists and stored at -80 degrees and -20 degrees were likely destroyed, a researcher tells the Daily News.”

War and Prosthetics: How Veterans Fought for the Perfect Artificial Limb – This was a great long form article that talks about the history of the prosthetic and its evolution. Collectors Weekly

“Though amputation was one of the first recorded surgeries, mentioned in the Hippocratic treatise “On Joints” around the 4th century BC, the procedure really became a viable option after major improvements were made in blood-loss prevention during the 15th and 16th centuries. Doctors began working with ligatures to seal off individual blood vessels and eventually used tight tourniquets around entire appendages to slow blood flow.”

Technology such as microprocessors are helping individuals move up and down steps which was, not just two years ago, a difficult chore. Also, wasn’t titular character from The Iron Duke actually an Anglesey? 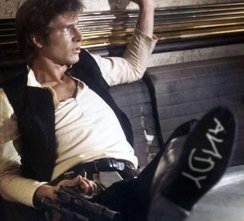 Star Wars 7: a Disney production – in fan pictures – Maybe you haven’t heard but George Lucas sold LucasFilm and the Star Wars franchise to Disney. According to the Press Release, Disney plans to release a new Star Wars movie every 2-3 years. The internet responded with hilarious pictures, most of them shock and dismay. I appreciate that the internet is funny when it grieves.  I have to wonder how much of the creative copyright Disney now owns.   Film | guardian.co.uk