The Fast-Track to Making a Million Dollars From Writing Books –   This is what happens when people who don’t read the books try to define the genre.

“The book is in a relatively new genre called “new adult contemporary” (read: it’s basically a mashup of romance and erotica — think Fifty Shades of Grey). Publishers are wary to take risks on things that are new and relatively unproven. And they’re right to: It’s hard to get bookstores to stock new adult contemporary books (unless they’re huge hits already) because they don’t really have a section for them yet. Are they erotica? Romance? Big-time successes like Easy by Tammara Webber and Sylvia Day’s Crossfire series are the exception and not the rule.”

Easy is not a mashup of romance and erotica.  It is not 50 Shades.  For god’s sake neither is the huge mass of New Adult books. And neither is NA the exception rather than the rule.  If you look at the past bestseller lists both at the Times, USA Today and Amazon, the NA books have dominated the list. DOMINATED.  Is the NA genre short lived? I don’t know but big time successes in that genre is not an exception.

Guess what book was number one last week? Reckless by S.C. Stephens. I’ve met Jeremy Greenfield who runs DBW and is the author of this piece but it just seems like another sign of gender bias. Women books are successful. Must be sexy times.  Forbes

Big November for Mass Market Paperback – For the first time in like 4 years, mass market saw a huge increase in November and by huge I mean 75.5%. Is it because of gifts? Remember 50 Shades and all those New Adult books are not mass market, but paperback (in the parlance of trade publishing).

” Growth of adult e-books slowed to 20.7% in November with sales from publishers that report to AAP’s StatShot program hitting $94.8 million. Still, overall sales for the adult trade segment rose 2.3% in the month as the much-troubled mass market paperback segment saw a 75.5% leap in sales, to $38.2 million. “Publishers Weekly

Intel PC Group Chief: 10-inch Tablet Will ‘Rapidly Erode’ – Kirk Skaugen, the VP and General Manager of Intel PC Client Group, believes that the 10 inch tablet form will not likely survive as a stand alone device but instead be incorporated into notebook-tablet hybrids. The true tablet market will be for the smaller devices in the 7-8″ screen range.

It makes sense. Tablets that have larger screens kind of beg you to do something with them other than simply consumption but tablet on screen keyboards aren’t well designed for input. Many cases offer a keyboard option.CRN

Britain’s Stiff Upper Lip Is Real — At Least In Literature – According to Olga Khazan, a random search of words shows that Britian’s literature is less emotional and American literature is more emotional.

There are other fun factoids in the paper.The Atlantic

To end with, I give you this ad from Durex. I probably should have saved this for Father’s Day. Maybe I’ll pull it out again. (hur hur) 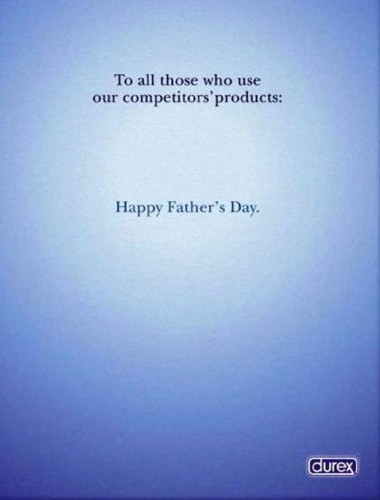