DABWAHA Voting started up again.   Courtney Milan and Loretta Chase are dueling it out in a very close race.

Amanda Hocking, self publishing star, has purportedly signed a deal for four books in excess of $2 million with St. Martin’s Press. Hocking is tired of the publishing gig and just wants to write. One thing I thought was really curious about the Barry Eisler/Konrath exchange was Barry and Joe’s claim that self publishing saves time

Now, with digital books, once again there's no more profitable use of an author's time than writing.

Dealing with a legacy publisher can be quite time-consuming, and aggravating, too. Of course, publishers might say the same about authors! But that doesn't change the fact that publishers can take up a lot of your time.

Compare to Hocking who says

I do not want to spend 40 hours a week handling e-mails, formatting covers, finding editors, etc. Right now, being me is a full-time corporation.

I think the big difference between Hocking and Konrath (and what may affect authors going forward) is reach.   Konrath’s success is built on cumulative volume.   He has over 24 stories for sale and the cumulative sales is what makes him a success.   His individual sales must not be significant enough, however, to attract the deal that Hocking is getting.   If you recall, Konrath shopped around his book, like Hocking, but did not have enough interest from publishers at the price Konrath wanted.   Hocking must have broader and more mass appeal creating volume from a single title alone.

A modern day artist recreates a few Mills & Boon covers. My favorite is the last one where it looks like the hero is choking her.   Oh, I am sorry. Maybe he is just a face holder. 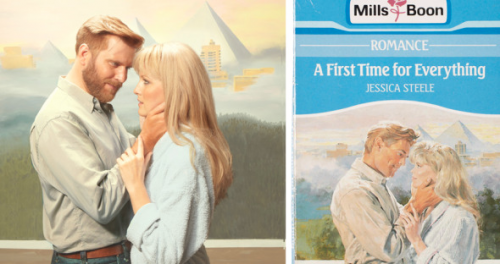