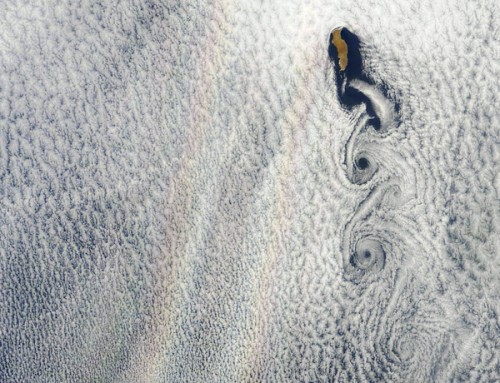 Short Sharp Science: Double rainbow all across the sky – seen from space – “This satellite image shows both “glories” – the rainbow-like lines stretching diagonally through the centre of the image – and von Karman vortex clouds. We can see the Pacific island of Guadalupe in the top right corner in this image from NASA’s Aqua satellite taken on June 20 this year.” New Scientist

News Corp.’s Board Approves Split in Principle – WSJ.com – “One company will house entertainment businesses like 20th Century Fox, Fox broadcast network and Fox News Channel while another houses the publishing assets, which include The Wall Street Journal and the Times of London along with HarperCollins book publishing and News Corp.’s education business. . . .Publishing generates much lower profit margins than the company’s TV and film operations, and faces stiff competition from online news outlets. Industrywide newspaper advertising has fallen about 50% in the past five years, estimates the Newspaper Association of America. While the Journal has added subscribers, and has protected its content behind a paywall, the new standalone publishing company will confront deep challenges.” WSJ, Paid Link

News Corporation Announces Split – NYTimes.com – “The restructuring still needs final approval from the company’s board, which gave the plan initial approval during a meeting Wednesday night. In the first half of 2013, News Corporation said, it will convene a special shareholders meeting to consider the split. The deal is also subject to regulatory approval.” NYTimes

Indie publisher prints books with disappearing ink | The Verge – “Ad agency Draftcb has won gold at the Cannes PR Lions for an innovative publishing concept, using disappearing ink to print books that gradually fade away over the course of two months. Dubbed “The Book That Can’t Wait,” the format — an intriguing one in a world increasingly dominated by Kindles and Nooks — is being pioneered by independent Argentinian publishing house Eterna Cadencia, which is using it to promote new authors. As the promo video (below) points out, “if people don’t read their first books, they’ll never make it to a second.””

Amazon to Acquire Dorchester (Unless You Are Ready To Outbid Them) | Digital Book World – According to a newly released notice, Amazon is the high bidder for the assets of Dorchester. Richard Curtis writes “In practice Amazon, or any firm that outbids Amazon in an auction to be conducted in August, will tender amendments to authors and agents transferring rights to the new entity, in exchange for which back royalties will be paid in full. The acquiring firm will then convert the books to e-books (a number of them have been converted already) and release them in e-book format. The original covers are among the assets to be acquired; our understanding is that Dorchester owned them outright and no rights clearance will have to be undertaken.”Digital Book World

Amazon is trying to fulfill customer needs through its own catalog should publishers try to withhold content. It also helps to strengthen Amazon’s vertical business silo. The next question has to be whether Amazon will acquire HarperCollins after it is spun off from the Fox entertainment division.