Small online merchants file suit against Amazon.com – Amazon is getting sued by everyone. A class action suit on behalf of small third party merchants using Amazon’s retail portal has filed suit for unreasonably freezing funds. The interesting details of the suit include that “Third-party sales account for about 40 percent of all products sold on Amazon and generate between 9 and 12 percent of the company’s annual revenue, according to analysts. The suit estimates the total merchandise value of third-party sales last year averaged more than $160 million a day.“ The Seattle Times

Opinion analysis: Justices reject publisher’s claims in gray-market copyright case – In an important first sale case, the US Supreme Court held that geography does not restrict the first sale doctrine. Wiley published textbooks overseas. A student resold these textbooks his family bought in Thailand to US students.The publisher argued that because the physical copies were created in Thailand they could not be resold in the U.S. The student argued that because they were made pursuant to license from Wiley that they were subject to the US first sale rule.

The copyright holder’s rights are not limitless “In copyright jargon, the “first sale” has “exhausted” the copyright owner’s §106(3) exclusive distribution right.” And because the publisher had authorized their production, they were “lawfully made” and thus not subject to geographic limitations and the first sale doctrine applied. Actual decision can be found here (PDF). Scotusblog

How Amazon Prime Became More Successful than Anyone Imagined | TIME.com – Amazon Prime is about the most important feature of the Amazon shopping ecosystem:

“Even more interesting than the growing Prime ranks is what Prime seems to do to subscribers. A 2010 Businessweek story stated that Amazon Prime broke even within three months of launching, not the two years predicted by its creators. That’s because customers spent as much as 150% more at Amazon after they became Prime members. Subscribers not only ordered more often, but after paying the $79 fee, they started buying things at Amazon that they probably wouldn’t have in the past. Since shipping was always speedy and free, members saved themselves a trip to the store for things like batteries and coffee beans. “In all my years here, I don’t remember anything that has been as successful at getting customers to shop in new product lines,” Robbie Schwietzer, vice president of Amazon Prime, told Businessweek.“

Written Testimony by Maria A. Pallante on Copyright Reform (PDF) – Maria A. Pallante, the current Register of Copyrights, made a plea to Congress to take up comprehensive copyright support. Pallante is a vigorous rights defender but does not really speak to the important interests of consumers. Instead she says:

“To this end, I would like to state somethin g that I hope is uncontroversial. The issues of authors are intertwined with the interests of the public. As the first beneficiaries of the copyright law, they are not a counterweight to the public interest but instead are at the very center of the equat ion. In the words of the Supreme Court, “[t] he immediate effect of our copyright law is to secure a fair return for an ‘author’s’ creative labor. But the ultimate aim is, by this incentive, to stimulate artistic creativity for the general public good. ” 2 Congress has a duty to keep authors in its mind’s eye, including songwriters, book authors, filmmakers, photographers, and visual artists. A law that does not provide for authors would be illogical — hardly a copyright law at all. “ USCO 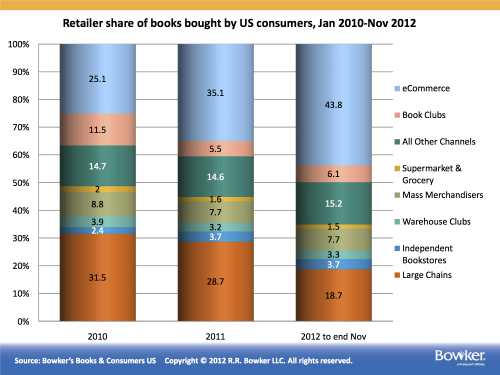 Bowker Market Research – More people are shopping at e bookstores over the big chains according to Bowker’s research. Shopping at big box retailers have fallen from 31.5% to 18.7% while online retailer share increased from 25.1% to 43.8%. The charts also suggest that US ebook readers are declining from a peak in the summer of 2012 near 30% declining slightly around December to 28.2%. Bowker