On Friday, I received a phone call from a lawyer in Utica, New York who represents Red Rose Publishing. RRP is claiming that I defamed them in this post here wherein I summarized the reported complaints of RRP authors and posted the president and owner’s email regarding her displeasure with RRP authors. The lawyer wanted my address so he could send me some correspondence that “laypeople may call a cease and desist” letter.   At the time of the phone call, I don’t believe the lawyer had read the post in question as he kept referring to “blog postings.”   I urged him to read the post and explain to me where I had been defamatory.   I reminded him that truth is always a defense to defamation.

Defamation is a part of the law with which I am intimately familiar and I have written a series of posts on the topic here at DA (because we’ve been the target of these threats before).

I relayed to RRP’s attorney that I would not remove the post unless he could convince me I engaged in a legal wrong. As there is nothing defamatory in the post, I refused to take it down, gave my address, and told him I would await his correspondence.

I take all of these threats seriously and presume that this is the opening salvo to a lawsuit because we won’t be threatened or intimidated into not posting news related items about publishing houses by phone calls or letters from lawyers or others.

As much as I don’t want to engage in costly litigation, if I have to protect our right to exert our First Amendment rights of free speech, I will.

In more disheartening news, Microsoft appears to be reentering the ebook market as a partner to the much talked about Blio software.   Microsoft owns the proprietary LIT format which has fallen out of favor amongst most mainstream publishers and retailers.   Blio is this much talked about ebook software that was conceived by visionary Ray Kurzweil.   Problematically, Blio has been in demo form for almost two years.   The ebook market needs another proprietary ebook format with yet another DRM like DA needs a lawsuit.

The Ninth Circuit has struck a blow to the First Sale theory arguing that if a product is sold that   (1) specifies that the user is granted a license; (2) significantly restricts the user's ability to transfer the software; and (3) imposes notable use restrictions, that sale is a license rather than a transfer of ownership.   The Vernor v. Autodesk case involved the use of physical discs being resold on eBay rather than digital media.   This is a huge blow to the First Sale right.

Another blogger suggests that the FTC require correct labeling of ebooks so that consumers will be fully apprised that what they are buying is a license to use a book during an indeterminate time.   Of course, once this fully penetrates the consumer public consciousness, prices for leased goods will likely drop dramatically.

In the plagiarism and publishing news, Tony Blair is accused of lifting text from a fictionalized version of his life in his recent memoir.   Author Frank Owen, author of Clubland (a book about the club culture) has sued writer Gerald Posner for copyright infringement.   Posner was found to have plagiarized for his writings at the Daily Beast.   Simon & Schuster, Posner’s publisher, has apparently done an internal investigation but has not released the findings of that internal investigation.

Ever since iBooks rolled out in April, I’ve had my doubts about Apple’s commitment to its ebook program.   Let’s face it.   Jobs himself says no one reads anymore and the current iBookstore is doing nothing to belay that belief.   To date, Nate the Great over at digital reader, counts only 33,000 books in the iBookstore.

Rose Fox, editor of the new romance section for Publishers’ Weekly tweeted a picture of the new look: 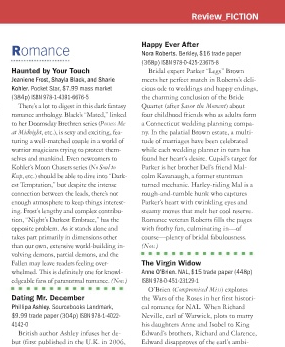 Amazon Kindle will be sold in Best Buy stores right along side the nook.   I think this is great for consumers because they will be able to compare the devices right next to each other.   I also hope that Best Buy continues to carry the Sony Readers.