Days numbered for illegal downloaders as crackdown is given tick of approval – New laws in Australia would allow a copyright holder to get a site blocked if there’s any evidence that the site is offering illegal content. The copyright holder needs only to apply for this injunction and there is no need to establish whether the website is actually liable for offering the content. This would apply to only sites hosted outside of Australia. So much for due process.

Copyright holders would be able to apply directly to the court for an injunction to disable access to the sites without having to establish whether the carriage service providers, which house the sites, are liable for the offending content. –The Adelaide Advertiser

Kindle Unlimited Pages Read – For those who are subscribers of Kindle Unlimited, a change in payment structure may have an impact on content offered through the program. When KU was announced, authors were paid a per borrow bounty from Amazon. The bounty per borrow (and 10% read) started out at $2.00 and then slowly dropped every couple of months to approximately $1.30-$1.40. This meant the first time a subscriber borrowed a book and read 10% of it, Amazon paid the author $1.30 regardless of what the price of the unit being borrowed. This lead to a number of authors offering serialized works or short works no more than 10-15 pages because the short works received the same bounty as the longer works. Amazon has announced a change. It will now pay per page read. If an author offers a book with 300 pages and 150 are read, Amazon will pay for the 150 pages read. If the author offers a novella of 15 pages, Amazon will pay for the 15 pages read. My prediction is that Amazon will pay close to 1c per page and under.

Beginning July 1, 2015, we’ll switch from paying Kindle Unlimited (KU) and Kindle Owners’ Lending Library (KOLL) royalties based on qualified borrows, to paying based on the number of pages read. We’re making this switch in response to great feedback we received from authors who asked us to better align payout with the length of books and how much customers read. Under the new payment method, you’ll be paid for each page individual customers read of your book, the first time they read it. –Amazon

An Inside Look at Facebook’s Approach to Automation and Human Work – Facebook is working hard to automate it’s site. One purpose for that is to free up their human resources to innovate on big ideas rather than be worn down by the “drudgery of work.

The reason why the automation is so important is that it does free up these teams to go think about and do things for the future. If you think about it, most tech companies in the world today are spending an incredible amount of time competing for the best of the best in the world. For a smart person in tech, there are just a lot of fun companies with fun problems to go work on. So once you’ve worked so hard to get people into the company and to ramp them up and to understand your environment, you want to keep them. You want to have them be engaged. You want them to grow and develop their careers and stay with you for this ride that is scale over a really long period of time.–Harvard Business Review 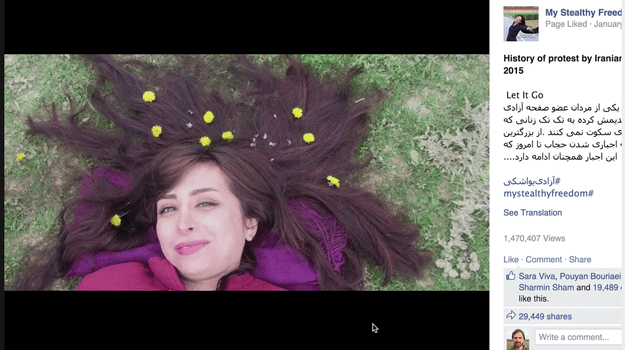 Iranian Women Are Showing Off Their Hair As An Act Of Protest And It Is A Very Big Deal – One woman is leading a quiet revolution in pictures in Iran.

Since 1979, all women in Iran are required to cover their hair in public. In 2014, approximately 3.6 million women in Iran were warned, fined, or arrested by the morality police for inappropriate dress, according to Esmail Ahmadi-Maghaddam, Head of the national security forces in Iran. Inspired, Masih Alinejad began the Facebook group, My Stealthy Freedom. With over 803,000 followers, the page has become a site of quiet and courageous protest.–Buzzfeed