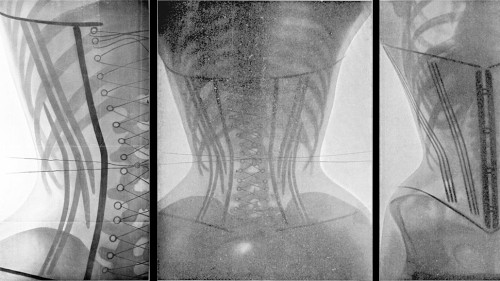 Taking X-Rays Of Women In Corsets Was A Haunting Use Of New Technology – The Public Domain Review had a post on the x-rays taken of corset wearing women in the late 1890s and published in Ludovic O’Followell’s treatise Le Corset in 1908. Digg picked up on this article and killed the site so I’ve only got the one picture to show to you. The x-ray displays the downward pressure the corset exerts on the rib bones, not to mention what was going on with the internal organs. Gizmodo

What’s the point of oral sex? : Seriously, Science? – I’m not entirely sure why studies like this are done because the conclusion is essentially – “IT COULD BE ANYTHING!!”

The Finale: Does Judge Cote’s Belief the Publishers Are Guilty Exonerate or Implicate Apple? | Publishers Lunch – The Apple price fixing trial is over and Judge Cote revealed that it was a good thing that the publishers settled because she would have found them to have conspired. The question, she says, is whether Apple was aware of and participated in, the horizontal collusion between the publishers. Publishers Marketplace (paid link)

“On the basis of this trial record I would find that the publishers conspired with each other in December of ’09 and January of 2010 to raise eBook prices.”

Snyder said in the back and forth on this point, “I think that the critical question is, in terms of Apple’s liability, whether Apple was aware of such a horizontal conspiracy.”

Judge Cote said, “I agree with that, absolutely.”