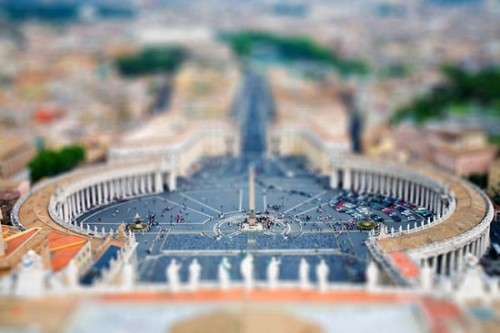 Let’s start the day out with something cool. I love tilt shift photography images.  Some photographers even use their iPhone cameras to create tilt shift images.  This is an image taken from the top of St. Peter’s Cathedral in Rome. 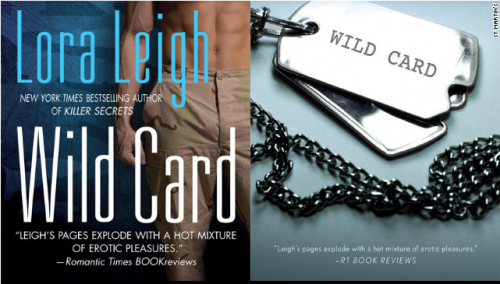 Explaining ‘Fifty Shades’ wild success – “If so, much of the success of the “Fifty Shades” trilogy may simply reside in its packaging. After acquiring English rights in March, Vintage Books released digital editions of all three books, followed by print versions in April featuring relatively tame covers compared with bodice-rippers of yore. Where one might expect two milky bodies intertwined, the covers of books one and two feature a gray silk tie and a bedazzled face mask.   … The formula seems to have paid off, and since then, the romance industry has been keen to reap the benefits of judging a book by its cover. Not long after the series took off, Harlequin and other publishers began reissuing old titles with toned-down covers.” cnn

The Lora Leigh makeover really blew my mind for some reason.  What I think is so interesting about this is that man titty has dominated romance covers since the 1970s (see our cover article here) and we’ve lamented the man titty cover in the past and what it says about the genre and us as readers.  I’m not entirely opposed to “stuff from the top of the dresser” type covers.  The biggest concern I have, though, is that publishers believe that it is the sex in the story that is selling and not the emotional conflict that ends with a committed relationship.  Plume, for example, is trying to repackage Anne Rice’s erotica trilogy and sell it to the 50 Shades crowd.  For anyone who has read the 50 Shades books, they know that the BDSM in the story is quite tame.

Digital Imprints Take Root – “Traditional trade publishers have been testing the digital-first/digital-only publishing waters for more than two years now, and the pace is accelerating. This month alone, Penguin is reviving the Dutton Guilt Edged Mysteries line as a digital only imprint, Kensington has launched eKensington as an e-book only imprint, F+W Media is moving its Crimson Romance e-book imprint from a beta test to full launch coinciding with the rollout of its newest e-book subscription site, this one for romance books, while HarperCollins’s Impulse imprint will double its output from one digital title per week to two this fall and will add William Morrow and Harper Voyager to the Impulse line, which began with Avon.” Publishers Weekly

According to the site, the author submits the book for evaluation and if the book does not meet the evaluation criteria, it will not receive an endorsement.  The evaluators look at plot,  characters, pace, accuracy, grammar/layout, and an overall assessment.  I will be interested to see a) how many authors participate in this program and b) how readers respond to it.

James Dawson: why teens in books can’t swear – “The reason the gatekeepers are so primed to sex and swearing is obvious. The gatekeepers are as aware as any of us that teenage readers have potty mouths. However, they have also cottoned on to a universal truth of children’s marketing. Children do not have money. Parents do. While parents are pulling the purse strings, it is they that booksellers must appease. Not being a parent, I cannot say with certainty, but I envisage that most parents do not want to be seen encouraging their kids to use four-letter words. After a recent school event I heard back from my school contact that a parent had complained that a “Christian school” had allowed me to come in and pedal an evil book featuring witchcraft. Parent power must not be sniffed at – without them buying books for their children, every part of publishing suffers.”  Guardian UK

Gatekeepers like retailers, schools and libraries are censoring books based on content suggests this author. Perhaps this is the why we are seeing a resurgence of young adult books in self publishing that are rife with the dreaded topics like sex and foul language. I do question this though. Nick and Norah’s Infinite Playlist had both sex and swearing. Kody Keplinger’s books are full of sex. Perhaps it is the UK publishers that are shying away?

Image Comics Is Having a Creative Renaissance – “IN this industry, creators have been losing control of their characters for years. It started back with DC’s Superman, created in 1938 by the writer Jerry Siegel and the artist Joe Shuster, and continues to Marvel’s Fantastic Four and the X-Men, who were co-created by Jack Kirby. These cases for ownership continue to go through the courts. Image has not been immune to these issues: in February, Todd McFarlane and the writer Neil Gaiman reached a confidential settlement regarding royalties owed to Mr. Gaiman for characters he helped create in Spawn. That same month, Tony Moore, original artist on the Walking Dead, filed a suit contending that he is owed more for his contributions. Robert Kirkman, who created the series, described the lawsuit as ridiculous.”  NYTimes

An interesting look at the three major comic powerhouses and the mid level upstarts.