Google’s Media Barons – John R. MacArthur, the publisher of Harper’s Magazine, has published a strange op ed piece arguing that Google is engaged in “for profit theft” by providing “logistical support for pirating and repackaging everything that we writers, editors, and publishers hold dear.” I’m not exactly sure what MacArthur is accusing Google of doing because he then goes on to complain about Google’s search bias.

MacArthur then derides Google for the dumbing down of America, accuses it of depressing teacher pay, and that it “will further deaden the senses of a people inured to violence in their films, their newspapers (which report on a largely unaccountable American army’s patriotic mission against the infidel in foreign lands), and in their own hometowns.”

Ultimately I can’t be sure if it is free content MacArthur hates; computers; search engines; or just anyone who is not a writer-teacher. Just because you can write doesn’t mean you can actually make a coherent argument. Maybe MacArthur should hop onto Google and search for “The Art of Persuasion.” Harper’s Magazine

Group Cover Pose Reveal! – Jim Hines has been disrobing and recreating cover images to illustrate how ridiculous and sexist the images can be. Then others agreed that if the SF/F fandom raised $5,000 for the Aicardi Syndrome Foundation fundraiser, John Scalzi, Patrick Rothfuss, Charles Stross, Mary Robinette Kowal, and Jim Hines would attempt to duplicate the cover of Young Flandry.  You will want to click this link. Trust me.


The fundraiser brought in more than triple that amount. And thus did the five come together, prepared to endure great pain and sacrifice all dignity to support a very worthwhile cause and simultaneously try to point out that, darn it all, some of our SF/F are just ridiculously sexist, you know?”Jim C. Hines 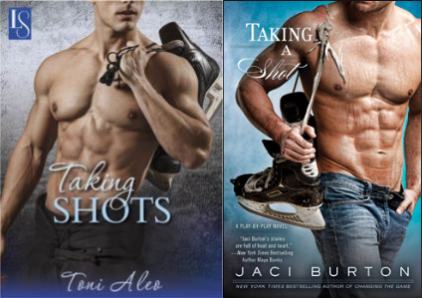 Cover WTFery – How about some originality? – Speaking of covers, Mad and Lillie blogged about the obvious copying Loveswept did for Jaci Burton’s “Taking a Shot. Burton’s sports books have featured some really incredible man titty covers (and I’m not even a fan). This is not a case of re used stock photo as I believe that the Burton covers are all from photo shoots. Instead, Loveswept has tried to recreate not only the cover, but also the title from Burton’s successful hockey book. [email protected] Novel Thoughts & Book Talk

Google wants to ditch passwords, let you log in with the ring on your finger – Instead of passwords, you press your ring against…something? I’m not sure but I kind of love that idea. When I banked with a big national bank and signed up for commercial billpay, they sent me a little device that had a constantly changing key code that I had to use to login. Google’s two step authentication system works a little like that. Enter your password and then enter a six digit authentication code that is only good for 60 seconds. I have that installed and I definitely feel more secure. The Verge

→ Jane
Previous article: Daily Deals: Historical fiction, historical romance, YA fae story set in Arthur’s time; and a YA contemporary
Next Post: REVIEW: When in Paris by Beverley Kendall