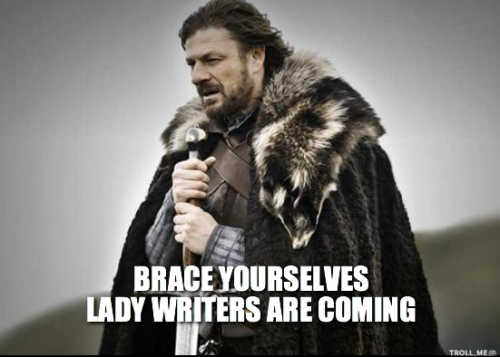 Apparently last week, the Science Fiction and Fantasy authors awoke to a disturbing news that women are writing Science Fiction Fantasy books and what is worse, there may be a huge influx of Science Fiction Romance.  This  agony over women writers in the SFF space likely arises over a sense of fear of marginalization. Women readers buy more than male readers and therefore, if there are more female writers writing stuff for female readers, then the male writers and male oriented books will be pushed aside on the shelf.

Stuart Sharp writes on the topic of Sci Fi romance that many of the existing romance writers don’t get things right and they sacrifice the “getting it right” for the sake of the romance.  Stuart, I can tell you that romance readers like authors who get things right too and that it isn’t just romance writers who are trampling over the “most beloved elements of the genre.  C.E. Kilgore tells Sharp to unwind a bit because we romance readers have our own shelves called “Romance” and we aren’t looking to invade the SFF shelves.  The problem may be that online writers get to “shelve” their books willy nilly and if you go to Nook Books – > SFF, you’ll see a lot of the girl-y SFR instead of the hardcore space aliens wanting to sleep with other space aliens ala Captain Kirk of Star Trek who was the intergalactic slut of the century.

So here’s my thought: Mr. Sharp’s post is a marvelous thing because it means change is happening! Those who fear hybrid genres–especially ones that mix SF and Romance–are aware of them like never before. They recognize SFR is a force to be reckoned with.

Heather has been advocating for more SFR for years so I hope Sharp’s fears are coming true and the women writers are coming out in full force with SFR books.

But there must be something in the SFF water because the official bulletin of the Science Fiction Writer’s Association for the last three months has kind of been an embarrassment to SFWA, at least to those of us looking from the outside in.  You see, old timers like Mike Resnick (Laura Resnick’s father!!) and Barry Malzberg spent a whole issue discussing women writers and their attractiveness – like were they “beauty pageant beautiful” or a “knock outs”.  (Source: E. Catherine Tobler)  Ouch.

The issue that followed had an article by another man that exhorted women to be Barbie like and “maintain our quiet dignity as a woman should.” (Source: E. Catherine Tobler)  Again, ouch.

The most recent issue had Resnick and Malzberg crying that they were being censored. I can already see Robin’s eyebrows raising into her hairline.  I think we’re going to have to do a little post on censorship and free speech.

The real strange thing is that these bulletins have been published under the watch of John Scalzi, current SFWA president.  He accepts responsibility for this but has been on tour for three weeks and hasn’t really explained how these bulletins were published under his watch.  I.e., were they put together without his knowledge by the staff and not reviewed by him?  I was a president of an association with a monthly newsletter and I had an opportunity to review the newsletter before it was published but it was put together by an entirely different committee.  Scalzi has set up a task force to look into this matter.

My five cents?  Male authors are feeling increasingly marginalized in publishing by female authors and this is the result.

Warner Music Group Inks iRadio Deal for Publishing, Recorded-Music Licensing – This billboard article is full of details about the negotiations behind Warner Music Group’s deal with Apple for iRadio, the internet streaming application that is set to be announced sometime in 2013 and possibly during the June 10 developer’s conference. Apple has agreed to pay more than other services like Pandora. Billboard

The recorded music deal calls for Apple to pay a per-stream rate of around 0.16 cents, similar to the rate Universal Music Group received. Like Universal, Warner also gets a percentage of ad revenue that would be generated by the Apple service, but payments would only begin after the service exceeds a certain audience threshold. For the publishing deal, Warner/Chappell also negotiated an additional percentage of ad revenue that is more than twice the 4 percent rate paid by Pandora.”

As more music is available for streaming, books will need to follow in response to customer demand. It would behoove people to start thinking about the best way to monetize that before Amazon sets the price. Right? Like, if I was Random House + Penguin, I’d be thinking about my own streaming library access model right now.

Speaking of Apple, the lawsuit over Agency Pricing begins today!

Barnes & Noble-Simon & Schuster Dispute Said to Hurt Sales – NYTimes.com – The Times gives a few more details on the fight between S&S and B&N.  It isn’t just over coop but the price that B&N wants to pay for books. It used to be around 40-50% off the cover and it appears that B&N wants a deeper discount.  Until this is resolved, B&N will continue to order Simon & Schuster books in much lower volume and in the case of most authors, perhaps none.  They will not give them display space or allow the authors to appear in the stores for booksignings.  NYTimes

One other publisher has accepted these new terms, but it did not identify the publisher as a Big 6 or one with more negotiating power.  This is not unlike when Amazon pulled the buy buttons from Macmillan.  This fight has been going on since last September but it wasn’t until 2013 that Barnes & Noble started putting pressure on S&S through decreasing print orders and reduced in store publicity. Simon & Schuster made two big print only deals with Hugh Howey and Colleen Hoover.  If they intend to do more of that, S&S will  have to have B&N on its side.

Who wins? B&N likely because they are the only major retail game and S&S needs B&N more than the retailer needs the publisher.