Warning: mysqli_query(): (22032/3141): Invalid JSON text in argument 1 to function json_contains: "Invalid value." at position 0. in /home/customer/www/dearauthor.com/public_html/wp-includes/class-wpdb.php on line 2187
 Monday News: Reporters beware, computers are writing your news now; Big books are back; Why I hate the strong heroine and more.
August 19, 2013

Monday News: Reporters beware, computers are writing your news now; Big books are back; Why I hate the strong heroine and more.

What I’m thinking about … why big books are back – Kirsty Gunn at The Guardian says that big novels are back and that for publishers it means that they can ask more from the reader – more pages, more value. But Gunn cautions that it isn’t just money that the publishers ask for with big books, but it’s time, opportunity cost.

Reading through 800 pages or so raises expectations in a way other reading doesn’t come close to. All that time given to a book – it had better be more than a gimmick, a trick, a post-modern conceit. It had better be a story we haven’t heard before, or already read in another version. It had better change us, make us different to how we were when we started – make us bigger, somehow, ourselves.

I’m currently reading Anslie Patton’s White Balance. It’s a longer book. Meljean Brook’s Guardian Demon was pretty much two books (close to 200,000 words). Patton’s book was a weekend read for me. It wasn’t one I could gulp down in an afternoon or an evening, but I really enjoyed the time I spent immersed in her world. I wouldn’t say I came away changed, but I don’t begrudge Patton the time I spent reading her book.

It’s not like I had something more important to do. I could’ve blogged, watched TV, or played Candy Crush. Instead, I spent around six hours reading White Balance. I’m okay with that. But Gunn is right. The longer the time I have to spend with characters, the more that they have to engage me on every level. Books | theguardian.com

I hate Strong Female Characters – Sophia McDougall makes a strong case for excising the adjective strong from our vocabulary as it relates to female characters. Describing a female character as strong is simply a sign of females still trying to catch up in terms of equality to males because it is assumed that a male character is strong. Female characters should be allowed to be everything instead of just strong.

The Strong Female Character has something to prove. She’s on the defensive before she even starts. She’s George from The Famous Five all grown up and still bleating with the same desperate lack of conviction that she’s “Every Bit As Good as a Boy”.New Statesman

Loss Expected to Widen for Barnes & Noble – What’s interesting about this article isn’t that it predicts BN should expect a decline in stock share price following it’s quarterly earnings on Tuesday. Nope. The item of note is the byline. First spotted by Mike Cane, this marks one of the first articles on Forbes written by a computer. Narrative Science is a computer program that the NYTimes wrote about in 2011.  Based on recent activities in self publishing, Narrative Science could probably produce a self published book that would reach into the top 100. Forbes 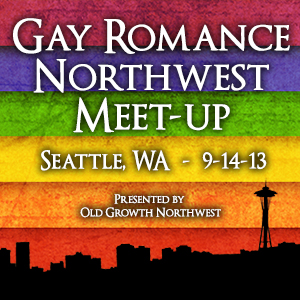 The conference itself is a half-day event and will be a series of panel discussions with gay romance authors and publishers from around the region. Afterwards, we are hosting a “Happy Hour” book fest across the street from the library at the Hotel Monaco which will feature author signings, author readings, giveaways, etc.

(Tickets for the Meet-Up are $25, which includes both the conference and post-con book fest.)

Roppé also interviews top book bloggers and Goodreads reviewers about what they are reading and what’s trending in romance. And no, they’ve never contacted me which is shocking because Goodreads sent me an email saying I was in the top 2% of all Goodreads reviewers. I say this tongue in cheek because this email was sent to virtually every blogger and reviewer I know on Goodreads. I actually really like they are including bloggers and reviewers in their podcasts.  Amazon

→ Jane
Previous article: REVIEW: Into the Deep by Samantha Young
Next Post: REVIEW: Seduction in Silk by Jo Beverley