VoterRegistration – This is an open source web app that is designed to help any person, no matter party affiliation, to register to vote. November is just under 60 days away and a U.S. citizen’s most precious right is the right to have a say in how she is governed. If you haven’t registered to vote or if you are unsure if you are registered to vote, USE THIS. Voter Registration Open Source App 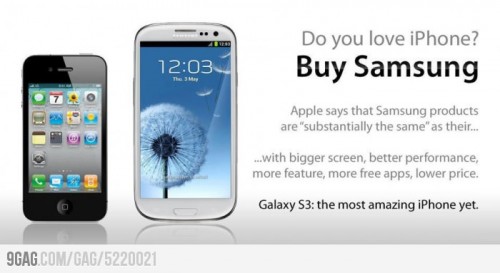 Love iPhone? Buy Samsung – 9Gag has created the next ad for Samsung. “Do you love iPhone? Buy Samsung.” headlines the ad. The text goes on to quote the argument that Apple made during its lawsuit –that the Samsung products are “substantially the same” as the iPhone.  The Samsung has a bigger screen, more powerful processor, and is far, far cheaper. Kind of brilliant. 9Gag

Jeremy Duns on R J Ellory (with tweets) · stevemosby – Jeremy Duns, a journalist and writer, who discovered and outed the plagiarist Quentin Rowan; who tracked down fake accounts created by Stephen Leather (and not fake accounts wherein Leather made shockingly racist statements); and who was suspended from Twitter for days for “spam”; has revealed that Roger J Ellory, an award winning bestselling crime writer, has been writing reviews under a sock puppet account of Nicodemus. Nicodemus had around 18 reviews and 6 of them were five star ratings for Ellory books. A few of the reviews were one star ratings for Ellory rivals. Storify

Duns sussed out that Ellory was masquerading as Nicodemus when Ellory signed a number of his comments (to various reviews) as “Roger” and “Roger from Montreal”. Ultimately Ellory confessed to this action when the Telegraph wrote about it and offered a half assed apology.

The recent reviews – both positive and negative – that have been posted on my amazon accounts are my responsibility and my responsibility alone,” he said. “I wholeheartedly regret the lapse of judgment that allowed personal opinions to be disseminated in this way and I would like to apologise to my readers and the writing community.”

In response to Dun’s work on Leather, Leather retaliated:

Both he and Steve Mosby started getting down votes on good reviews of their books. Both also featured in Leather’s horribly bad “Inspector Zhang Goes To Harrogate” short story, alongside himself as a best-selling and massively-penised (I assume) thriller writer. The story was pulled from Amazon (by them or by Leather, though I suspect the latter because Amazon so far have shown no inclination to do anything about people gaming their review system) shortly after a one-star review drew a bucket of “OMG YOU DON’T KNOW SHIT LEATHER IS THE BEST EVAH” responses.

The Crime Writers’ Association has responded:

The CWA feels this practice is unfair to authors and also to the readers who are so supportive of the crime genre. It does not fit with our ethos of supporting all published crime authors and promoting the crime genre. At present we don’t know how widespread the practice is. However we will be taking steps to set up a membership code of ethics, and considering if other steps may be necessary from us as an authors’ organisation.

Some are calling it “the Wild West”. Is that an attempt to romanticize the fraud that is taking place by authors? Visit a reviewer blog these days and you’ll almost always see an FTC violation. We bloggers aren’t engaged in Wild West behavior. Instead, bloggers see threats from authors (See STGRB site) and are ceasing to blog because of those threats and sock puppetry. It would be nice of author organizations would crack down on things like attacks against bloggers, sock puppetry, and the like but I don’t see it happening. Instead, bloggers, readers and reviewers will continue to be under attack and those who try to speak out, like Jeremy Dun, will be blasphemed by the frauds.

Apple, publishers offer antitrust concessions – While Apple is determined to fight on here in the States, abroad Apple and four publishers (Simon & Schuster, News Corp unit HarperCollins, French group Lagardere SCA’s Hachette Livre and Verlagsgruppe Georg von Holtzbrinck, which owns Macmillan in Germany) are in settlement talks with the EU which would return the ability to discount to retailers like Amazon for two years. Reuters

Pentagon threatens legal action over bin Laden book – The Pentagon is considering suing the SEAL who co wrote the book, No Easy Day, saying that SEAL signed two non disclosure agreements and that the book violates those agreements. Pentagon also asserts that those facilitating his breach could also be subject to this suit which could pursue criminal remedies along with civil remedies. The author has some that some of the proceeds from this book would be shared with the widows and orphans of fallen SEALs. The author has also been revealed to have advised on the creation of a video game and met with Stephen Spielberg regarding the making of a movie of the SEAL’s life culminating with the Bin Laden raid.Reuters

“You are in material breach and violation of the non-disclosure agreements you signed,” said the letter by Jeh Johnson, the Pentagon’s General Counsel. “The Department of Defense is considering pursuing against you, and all those acting in concert with you, all remedies legally available to us in light of this situation.”