July Bookstore Sales Dropped 6.3% – July book sales in retail brick and mortar stores were disappointing in July. PW pins this on the fact that there is no set of books that sold as much as the Fifty Shades trilogy last year. I’ve been hearing rumbles that overall book sales for indie authors were depressed in the past couple of months as well.

I wondered if this is because of the drop of Agency pricing and the subsequent discounting of traditional published books. The digital equivalent of mass market books have dropped in price to around $5.99 for many books. The last couple weeks of NYTimes lists have shown a reduced number of self published authors. I’m not sure if there is a lowered number of sales overall or whether there is an uptick in previously marked Agency books that have been on people’s wishlists?

We are now entering the serious book season when the big publishers release their “big books” in anticipation of the gift giving season. One fairly reliable hit maker appears to be Amy Einhorn. Einhorn pulled The Help out of a slush pile and her most recent publication, The Husband’s Secret by Liane Moriarty is making waves this month. Publishers Weekly

OverDrive end user survey results – Spring 2013 – I read that Netflix uses torrents to determine what movies it should acquire for its subscription audience. Perhaps publishers should look to Overdrive statistics to learn more about their reading audience. Users of the digital library system are overwhelmingly female between the ages of 40 and 64 and whose household income is over $50,000. Over half of the users of digital library systems start browsing for books from the Overdrive site and over half visit weekly. Other interesting statistics are included in OverDrive’s infographic. Overdrive 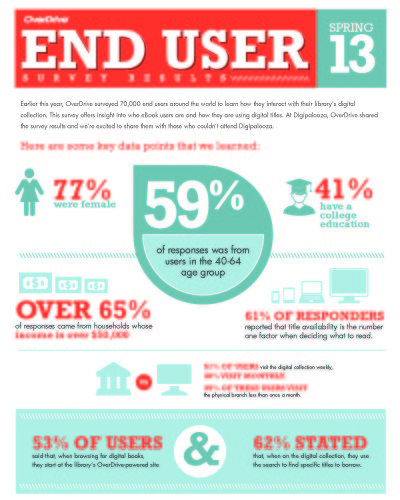 The Illegal Vodka Pipeline You Never Knew Existed – In Rome, ancient viaqueducts still transport drinkable water throughout the city. Mother Jones brings you other pipelines through which everything from orange juice to vodka has traveled. I know what you are thinking and that is we should be mixing the pipelines of orange juice and vodka to get fill a water fountain that would deliver screwdrivers to thirsty travelers. Mother Jones

Lynda Barry: The 20 stages of reading –  Lynda Barry write and illustrates the 20 stages of reading. You fall in love with reading and maybe even genre books (like mysteries) but then as an adult you had to pretend to enjoy serious bizness literature (books published in October through November).  Then you suddenly fall nose first into a genre book again and remembered your youth nostalgically.  Genre books = mystery to lit fic readers, by the way.  Washington Post via several readers like Wahoo Suze

→ Jane
Previous article: Daily Deals: Boxed sets, freebies, a YA retelling of an Agatha Christie mystery, and a western
Next Post: REVIEW: Relativity by Cristin Bishara