Doctors report first cure of HIV in a child – The biggest news of the day is that a child born with HIV was been cured according to medical staff at the University of Mississippi. The circumstances surrounding the child are rare. Most babies are not born with HIV due to injections of prebirth drugs. But this one was and one of the conclusions drawn was that because aggressive therapy was started early on the premature baby, they were able to address it early.

It’s possible that giving anti-retroviral drugs so early prevented the AIDS virus from hiding in her white blood cells, which can serve as “reservoirs” of infection. These reservoirs of hidden cells can cause the disease to come back if patients stop their medications.

What’s going on with readers today? – Joe Wikert followed up with the Goodreads CEO on how readers were discovering books. Chandler claims that based on Goodreads data, Amazon’s review platform, social media (both Facebook and Twitter), book blurb, and cover rank on the lower end of influencers. It is the “trusted friend” that influences readers more than anything. He also said that 73% of ebook readers shop around for the best prices and that can happen only on tablet devices where you aren’t locked in to one platform. Tools of Change for Publishing

Amazon v. Indies:  On March 2, I received an email from Amazon informing me that the edition of Beautiful Disaster I had purchased for $.99 was no longer available but that I could order the new, expensive version instead.  I could also request a refund.  I deleted the email after being a little disgruntled about paying 7 times what I had originally paid and let it go. I wasn’t going to read the book again.

But the issue became a giant “Amazon against Indies” thing.  Authors came out on Twitter and their blogs accusing Amazon of oppressing them again.  Jamie McGuire was being punished for self publishing and then moving to traditional publishing after her books were bought by Atria, a division of Simon & Schuster.  Yet, there was one big difference between the self published version and the Simon & Schuster. The original self published version contains virtually all the lyrics to the Rolling Stones’ “Satisfaction.”  The S&S version has basically one line, the start.

Using song lyrics requires permission and it is extremely expensive.  Blake Morrison writes about having to pay 300 pounds for the use of one line.

In sum, it could be that Amazon is punishing self published authors or it could be that Amazon is trying to get out from between a copyright infringement suit.  The Stones don’t take copyright infringement lightly.  For instance, the band, The Verge, used a sample from an orchestral version of the Stones’ “The Last Time” in “Bitter Sweet Symphony.”  The song became super popular.

Originally, The Verve had negotiated a licence to use a sample from the Oldham recording, but it was successfully argued that the Verve had used “too much” of the sample.[14][15] Despite having original lyrics, the music of “Bitter Sweet Symphony” contains bongo drums sampled from the Oldham track, which led to a lawsuit with ABKCO Records, Allen Klein‘s company that owns the rights to the Rolling Stones material of the 1960s. The matter was eventually settled, with copyright of the song reverting to Abkco. Songwriting credits were changed to Jagger/Richards/Ashcroft, with 100% of royalties going to the Rolling Stones.[1]

So yeah. I can see Amazon trying to get out from under that. When S&S removed the song, one would have thought McGuire might have known something was wrong with her self published version at that time. But currently she disclaims all responsibility or knowledge and places the blame squarely on Amazon.

My guess is that the Stones almost has to pursue this and announce some kind of monetary victory because otherwise others will be tempted to use the lyrics without compensation.

Now it could be something else entirely but the copyright issue would explain why McGuire is being affected; why the S&S version is where readers are being redirected; and why others are not.

Update: Amazon sent me this email:

The initial email sent to customers re: the availability of “Beautiful Disaster” was an error. We’ve since sent a follow-up email to those customers to clarify that there’s no action required for them to continue enjoying the book.

P.S. I do think Amazon is evil, but I don’t think it’s evil by trying to oppress indies. 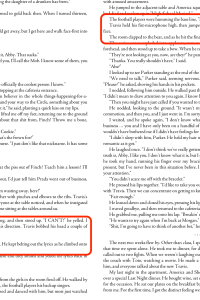 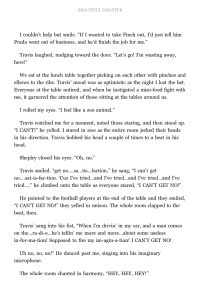 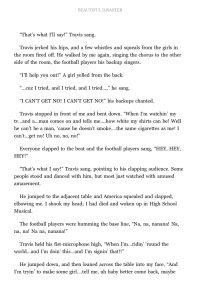 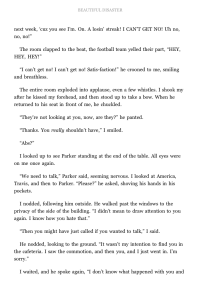 → Jane
Previous article: REVIEW: After the End by Bonnie Dee
Next Post: REVIEW: Inquiry into Love and Death by Simone St. James