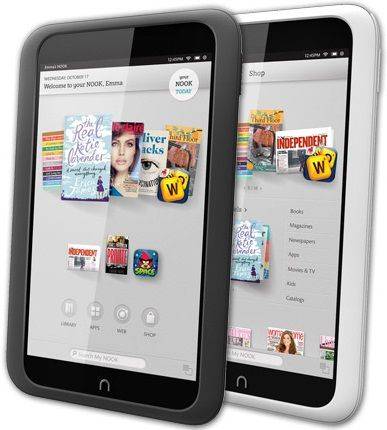 Nook HD, HD+ Now on Sale at Staples, Target – Nate from the Digital Reader noticed that several stores are discounting the nook devices. Staples, for example, is selling the Nook HD+ for $200. That’s the device with the 9″ screen. The subtext, Nate suggests, is that these stores are having a hard time moving Nook HDs. The Digital Reader

Amazon Select Payment Drops 20% in November – Morris Rosenthal says that the Kindle Select payments have dropped 20% and under the $2.00 mark which represents a loss for self published authors who ordinarily price their books at $2.99 (to avail themselves of the 70% royalty share). Kindle Select is the program by which authors agree to allow Kindle device owners borrow one book for free a month. Kindle Select then pays out per borrow dividends to authors based upon a pool provided by Amazon divided by the amount of authors participating divided. Kindle Select requires a three month exclusivity deal with Amazon whereby the book cannot be sold at any other venue than Amazon. Rosenthal suspects that the per book payment fell because this was the first month in which International Kindle owners were able to borrow a book. Self Publishing 2.0

Russian YotaPhone aims to reinvent the smartphone with secondary Kindle-like display | The Verge – This is what I call innovation. Russian YotaPhone has released pictures and information about a prototype they hope to introduce into the stream of commerce in the first part of 20014 which will feature two screens. The front screen is an LCD and the back screen is eInk. The benefits of this would be enormous due to the low energy consumption used by an eInk device along with increased visibility outdoors. The eInk portion of the device would be for primarily view only with the input oriented applications taking place on the LCD side. The Verge

Tracking Amazon: The Minimal Effect of New E-book Policies – I’m not sure what PW’s point is here but it argues that removal of agency pricing and the subsequent discounting by retailers have not affected the Amazon bestseller list. This is true because the discounts that Amazon has done to non agency prices are fairly minimal but I suspect that PW is arguing something different.

Patented Book Writing System Creates, Sells Hundreds Of Thousands Of Books On Amazon – Philip M. Parker, Professor of Marketing at INSEAD Business School, aims to have his computer program producing romance books. Although a novel is a work of fiction, it’s no secret that certain genres lend themselves to formulas, such as romance novels. That may not make these works rank high for their literary value, but they certainly do well for their entertainment value. Somewhat suprisingly, romance fiction has the largest share of the consumer book market with revenue of nearly $1.37 billion in 2011. Singularity Hub

→ Jane
Previous article: Daily Deals: A selection of stories of romance and mystery for 1.99 and under
Next Post: REVIEW: Espresso in the Morning by Dorie Graham