Macklemore the first unsigned artist in modern history to hit #1 on U.S. Charts  – Macklemore first came to my attention when he did this great music video in support of the gay marriage effort in Washington. I watched “Thrift Shop” on YouTube and quickly forgot it. The other day it was playing on the radio and I thought to myself, hey, that’s those guys from the gay marriage video. Then I read this article about how Macklemore will become the first unsigned to a big label artist to ever reach billboard’s #1 charts and he did so on the trumpets of music bloggers who have promoted Mackelmore. Silent Attraction. 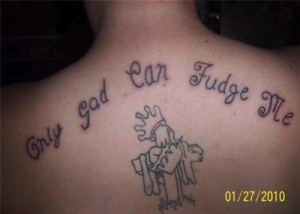 The Most Blatant Grammar And Spelling Mistakes Ever Seen In Tattoos – To every person everywhere, my response will now be “only God can fudge me.” Click on the link for more examples of hilarious tattooes. Happy Place

Google, Microsoft, Yahoo, and Facebook say they require warrants to give over private content – Congress failed to pass reform on the ECPA, instead allowing an amendment which would require the government to get a warrant to obtain the contents of emails hosted in the cloud. Currently emails that are over 180 days old have little privacy protection. Now companies like Google, Microsoft, Yahoo and Facebook are publicly saying that they will require the government to present a warrant and will stand their ground on the Fourth Amendment, an Amendment the Supreme Court has been slowly eroding with each issued decision.

It’s a little sad that information providers are more interested in protecting privacy rights than the US government but with more individuals becoming concerned about privacy, it is likely in the best interests of these companies to be proactive about protecting its users. The Verge

Children’s & YA Hardcover Sales Up 24% – September 2012 publishing numbers show a substantial rise for Chidren and YA books. Knowing that over half of YA books are being purchased by adults, the YA growth numbers aren’t showing an increase in a pool of readers but a shift from the adult hardcovers which are down 1.5 percent. Mass markets continue their monthly decline, down 16.1%. GalleyCat