The Kindle devices have been released to the media and there are a few reviews.  Of the Fire, reviewers say the it is easy to access Amazon content and if all you want to do is consume media rather than create, the Fire is probably the right kind of device for you, particularly at the price point of $199. It does appear to be buggy, however, with some lapses in page turns or the need to be precise when interfacing with the touch screen.

I’ll have my device and the nook tablet (hopefully) this week and I’ll review the devices this weekend.  It might take more than one post given that I’ll have two devices and I want to compare them to the iPad as well. Don’t forget to check out our Vox review.

According to Publishers Marketplace (reg req’d), Kobo has launched the Kobo Touch with Offers:

Within the next two to three weeks, Kobo will match Amazon’s ad-bearing ereaders with their own “Kobo Touch with Offers” with “valuable offers and sponsored screens in discreet places outside of the reading experience.” The ad-driven model will sell for just under $100, a $40 discount over the ad-free model.

I perused the flyers at BFads.net for ereader deals on Black Friday.  A couple of places like Radio Shack and Staples are selling the devices at retail but offering a $10-$20 gift certificate to the stores along with the purchase of the device.  There are two actual deals:

*****
Barbara Grier, a pioner of lesbian romance, has passed away.

Barbara Grier, a founder of one of the most successful publishing houses for books by and about lesbians, including a nonfiction chronicle about lesbian nuns that became a phenomenon after it drew complaints from Roman Catholic officials, died on Thursday in Tallahassee, Fla. She was 78.

Crain’s New York, a business publication, indicates that the once robust trade paperback market seems to be languishing.  Trade paperbacks were immensely profitable for publishers because most of the costs for the book had been absorbed at the hardcover stage.  Now, the sales of trade paperback releases for a hardcover have declined dramatically indicating that the cycle of multiple editions of print might be over.

“What I would say is, the mix has changed,” said Morgan Entrekin, publisher of Grove/Atlantic, which hasn’t cut reprints but has expanded its line of original trade paperbacks. “It may be harder to do two [print] editions of the same book.”

Perhaps it will be more trade originals and hardcovers with a simultaneous ebook release and no subsequent print editions. The question will be whether the publishers will reduce the ebook prices.  I’m guessing that most will not. 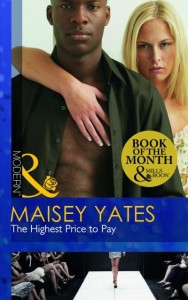 Maisey Yates is getting some negative feedback on the cover of The Highest Price to Pay sent to her publisher, Mills & Boon.  I am guessing it is not because the arm across the hero’s chest is completely disembodied from the body of the heroine behind him.  It’s disappointing that Mills & Boon is receiving complaints about this book given that race relations in the UK is much different than it is here in the US (this is not to say that there isn’t racism in the UK, but it is different than in the US).

HarperCollins group digital director and publisher David Roth-Ey spoke with New Media Age about the recent consideration, saying, “Certain kinds of books create immersive reading experiences whereby ads would be too interruptive for readers, and publishers and even advertisers aren’t likely to put a premium on that. But information books, for example a Collins birds guide, could provide very valuable real estate for contextual advertising – in this case potentially a binoculars manufacturer.”

Stanza might be alive for now, but Amazon has come out and said that this will be the last update for Stanza.  IOS5 is it,folks.

Simon & Schuster is reorganizing its sales force to place more bodies on the digital side and this shift in focus also will result in some layoffs:

As a result of the change, Frank Fochetta, director of field sales, and Lauren Monaco, director of national accounts, are leaving the company along with what are believed to be about eight other sales employees. S&S, however, said it plans to hire about that same number to beef up its marketing programs and to fill selected spots in sales.