Not as awesome as the stickman, but if you type in “Let it snow” in the google search box, Google has a little easter egg for you.

Barnes & Noble coupon for $20 off a Nook Color or Nook Simple Touch.

In searching for a wall organizer for my kitchen, I came across this online store called “see Jane work“. It has an eclectic selection of work tools and I thought I would share it with my working girl friends here on DA. 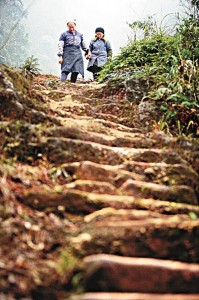 This is an incredibly romantic story that I saw linked on Reddit. A young man fell in love with an older woman in China 50 years ago. At that time, it was illegal and immoral for this reverse May / December relationship. They ran off together and lived in a cave in Jiangjin County in Southern ChongQing area. During their fifty years together, Liu, the husband, carved 6000 stairs in the side of the mountain so that his wife, Xu, could more easily navigate down the mountain. Amazing.

Kate Woodbury laments the BBC adaptation of Agatha Christie’s “The Mystery of the Blue Train” wherein the BBC version does not include the “rogue husband of the murdered victim does NOT pursue the book’s staid, grey-eyed heroine.” The book does.

Woodbury goes on to say that the magic of Christie and romance novels is the concept that Rogues get love too. It’s a fun article.

Ms. Bookjunkie pointed out an article that says Plaxico Burress emerged from prison with a new habit, a good one. Burress began reading while in prison serving a 20 month sentence “in jail for accidentally shooting himself in the leg at a Manhattan nightclub.”

Burress, who caught the game-winning touchdown in the Giants Super Bowl XLII upset of the Patriots, read a total of 82 books to help pass the time during his 86 weeks sitting alone at the Onelda Correctional Facility.

Indie bookstores are up in arms about Amazon’s new price check app and promotion that pays shoppers $5 to order a product they see in the store from Amazon. The Amazon price check app promotion doesn’t include books. Instead, it is for the toys, electronics, clothes and anything else you find at big box retailers. Tim Carmody of Wired notes that Best Buy has removed the UPC codes from its products to combat Amazon’s price check app. Because Amazon is gunning for Best Buy and Wal-mart, not your local indie bookstore.

This is because Amazon simply doesn’t care about independent bookstores. Little bookshops are not even on Jeff Bezos’ radar anymore. He and Amazon are after bigger game: Best Buy (who have pulled bar codes off their products to defend against precisely this), Wal-Mart, Target, Toys”R”Us, Costco, and Macy’s.

Carmody goes on to explain why the inflammatory rhetoric exchanged on both sides won’t stop even though both have good points mixed up with the irrational.

This is a FINAL CALL for proposals for the Romance Area for the Popular Culture Association’s 2012 Annual Conference, which is being held in Boston from April 11 – 14, 2012 (one week later than we have traditionally held it in the past).

Call For Papers: Romance Area
Deadline for submission: December 21, 2011.
We are interested in any and all topics about or related to popular romance: all genres, all media, all countries, all kinds, and all eras. All representations of romance in popular culture (fiction, stage, screen—large or small, commercial, advertising, music, song, dance, online, real life, etc.), from anywhere and any-when, are welcome topics of discussion.
This year we are especially interested in papers on Romance on/and/in Television, to be presented on panels jointly sponsored by the Romance and the TV areas.
The Romance Area is also co-sponsoring with the Gay/Lesbian/Queer area papers that discuss BDSM and Kink in any form. Representations of BDSM/Kink in popular media and/or discussions of real-life BDSM/Kink practices and practitioners are all welcome. Romance is not a necessary component of papers to be presented in BDSM/Kink.
The Romance Area will consider proposals for individual papers, sessions organized around a theme, and special panels. Sessions are scheduled in one-hour slots, ideally with four papers or speakers per standard session.
If you are involved in the creative industry of popular romance (romance author/editor, film director/producer, singer/songwriter, etc.) and are interested in speaking on your own work or on developments in the representations of popular romance, please contact us!
As we do every year, the Romance area will meet in a special Open Forum to discuss upcoming conferences, work in progress, and the future of the field of Popular Romance Studies. All are welcome to attend.
Submit a one-page (200-300 words) proposal or abstract by December 21, 2011, to PCA’s online database:http://ncp.pcaaca.org. Specify the Romance Area (for any/all of the topics above) and Sarah Frantz, the Area Chair in Romance, will be notified.
If you have any questions, please contact Sarah S. G. Frantz: [email protected].