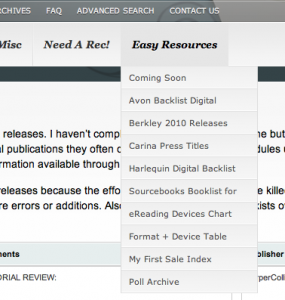 Because sleep is for the dead, I spent some time in the past few weeks compiling a list of upcoming books. I hope you find this helpful. I have more to add (see the prefatory note on the upcoming books page).

In the UK, authors receive a royalty every time someone checks their book out from the library. These are called PLR fees. These fees are in jeopardy of being reduced and the reduction will affect romance authors the most. Some romance authors earn more through PLR scheme than through royalty payments.

Authors receive just over six pence per loan, up to a cap of  £6,600, through the Public Lending Right (PLR) scheme, something many describe as a “lifeline”. Along with all bodies funded by the Department for Culture, Media and Sport, the scheme’s budget is being reduced this year by 3%, to  £7.45m, and authors are desperately concerned that further reductions will be forthcoming in the autumn, when the government’s next spending review is published.

Amazon has added embedded video and audio in books playable on the iPhone and iPad. I can see this being a great boon for how to manuals and recipe books.

Colleen Lindsay started a debate about how agents should get paid in the future. Apparently many feel that moving away from a contingency fee toward a flat rate or per piece payment is awful. In the law, there are two ways for lawyers to get paid – by the hour and contingency fee. There is nothing inherently immoral about either method. Contingency fee system allows lawyers to take on riskier cases in hopes for a great reward but it’s not a morally better method of being paid by a principal.

Nadia Lee and agents at Wylie Merrick support a reading fee (i.e. a fee prospective authors pay to have their pieces read by an agent.

I think all of these things are fine so long as there is a good governing body. By this I mean that agents should be regulated with a clear code of ethics and a clear method in which to bring complaints and have those investigated. I remain surprised that literary agents aren’t policed in such a manner.

Agent Andrew Wylie is making threats that he is going to start bypassing publishers and selling direct to etailers like Google or Amazon if publishers don’t come up with better digital book royalties.

Considering that most publishers won’t buy without digital rights, it will be interesting to see what comes of Wylie’s threats.

Moriah Jovan suggests that authors aren’t going to get rich by publishing through New York and that it will be the intermediaries that benefit in the new system. Jovan urges authors to consider self publishing as a way to making a liveable income off of writing.

Don’t like my analysis of ebooks and ebook readers? Try Jason Perlow’s article on for size. He compares the Apple iPad apps for reading. He likes BN Reader App with the Kindle second.

→ Jane
Previous article: My First Sale by Barry Eisler
Next Post: REVIEW: I Kissed an Earl by Julie Anne Long