Enjoy sites like Groupon or Living Social?  If so, you aren’t alone.  Around 50 million people have used Groupon inviting a hoard of copy cat social coupon sites like locusts to a wheat field.  All Things D reports that Hearst Owned magazines will launch its own group commerce site that will launch this summer:

The offers, which will start rolling out later this summer, will primarily target the male-dominated audiences of the two magazine brands. Later, Hearst will expand it to other demographics through such well-known magazine properties as Marie Claire, Cosmopolitan and Esquire.

HarperCollins has a book site called Book Perk which is similar to a coupon site.  The deals aren’t daily and they aren’t quite as attractive as most Groupon deals (which are usually for 50% or more off) but they are book specific.  The latest deal is for paper readers:

Kelly McClymer’s blog post on what author royalties should be.

Conclusion: 25% net is much too low a royalty rate, a 50% net is too much as it assumes no cost to the publisher and is not realistic. 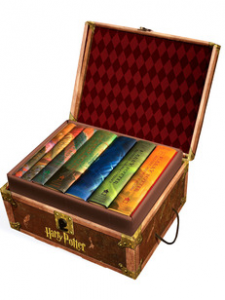 Ideeli is also having a book sale.  Scholastic is selling boxed sets of its most popular titles: Harry Potter, Hunger Games.  The Harry Potter collection in a treasure chest is $150 (regularly $195). I love how the books get exponentially larger as the series waxes on.  To my great dismay, the Captain Underpants boxed set is on sale. We just bought the box set at Barnes and Noble two weeks ago.

This is the Princeton Report of their eReader pilot program. (PDF)  Students were issued Kindle Dxs for study purposes.  The major issues were the lack of ease of annotation. For leisure reading, the Kindle worked great. For scholarly reading, not so great.  The report is based on the first generation of Kindle Dxs and there have been software improvements but it’s still a great resource for those designing ebook readers and ebook reading software.

A new-ish blogger, Lux Lucas, had a great epilogue post in response to the discussion we hosted at DA last week.  She suggests that epilogues are the price of sentiment but also brings out a really interesting point about the out of step heroine and hero:

Opponents of romance like to talk about its conservativeness, its heteronormativity. Certainly the genre can have those elements–and when an epilogue works overtime to reinscribe its characters into the problematic social fabric they’ve been trying to buck, I start to feel some sympathy with those criticisms. How many times have we read the scenario in which rakes or bluestockings express their great ennui with the shallow/rigid/traditional society that enmeshes them only to see those same characters absorbed back into the fold at the end of the book? Often, indeed, this reabsorption seems to be a desirable end that the epilogue is designed to effect. 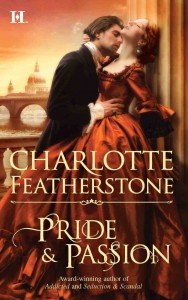 And finally, I have updated the Coming Soon catalogs. The August catalog is pretty much complete although I am missing most of the series books.  Here is the July catalog.  In adding in the covers to the catalog, I came across this gorgeous historical romance cover. I love the color of the cover (kind of pumpkin-burnt orange) and I love the positioning of the couple.  The look of the couple is also arresting with both of them appearing in very period oriented clothing.  The ring on the man’s very big hands is also a great touch. Yeah, I’m totally interested in reading this book just based on the cover alone.