The New Yorker’s cover this month features about every Obama slur possible on its cover. It’s obviously meant to be satiric but is it? My thinking is that if you put McCain on there as a Manchurian candidate, while ironic and satirical, it would also be offensive. Of course, media shouldn’t shy away from being provocative and even offensive at times. 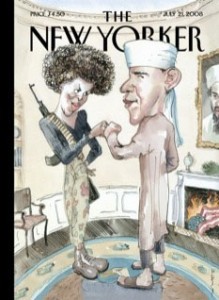 What are your thoughts? (As an aside, I read three Susan Mallery books (the Buchanan series) and her characters all do the terrorist fist bump!)