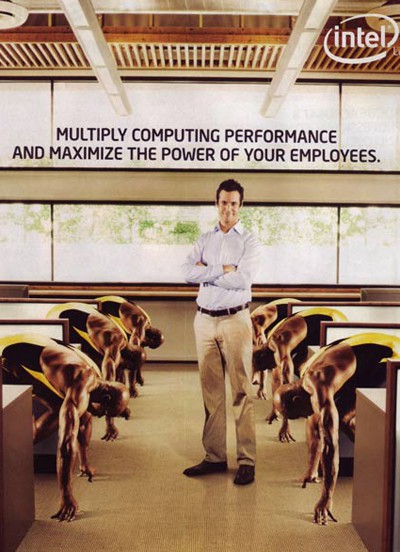 In a case of either monumental stupidity or poor judgment (or both), Intel choose to run an ad for its new Core Duo processor by showing six black men (who all look the same) in a crouched position with one Dockers clad white middle management wank in the middle. The black men are supposed to be sprinters, but the visual imagery of these six black men in a near kneeling position with the white guy standing in the middle is just bad, bad, bad.

Even taken at face value, without the horrible symbolism that could be read into the ad, the fact is that the ad is selling the black folks as the workhorses and the white folk as the pants clad office management. See. Bad all around.

Copyranter claims that it is reverse discrimination, suggesting that Intel is calling him slow and suggest an Intel boycott for the reverse racism against crackers. (This is tongue in cheek, obviously, before anyone goes off on copyranter.)

Me thinks that some Intel Ad Exec is dusting off his resume and looking for a new job.