Harry Potter No. 7 Revealed (For Real This Time) 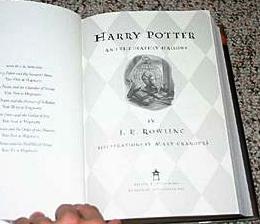 The final version of Harry Potter and the Deathly Hallows is on the internet for anyone to view, if you are good enough to google it. The book has been photographed, two pages at a time, by someone (I assume a bookseller or a distributor). There are slideshows and photographs that reveal the deaths and the ending (for the record, it is nothing like the previous spoiler). edited to add: link seems to be down. Having seen some of the photos, it looks like the real deal to me. So if you want to be spoiled, the answer to the Harry Potter question is out there despite excessive and extreme security attempts.

The trucks Bloomsbury will use are fitted with satellite tracking systems costing up to 1,000 pounds each, which will reveal whether any of the vehicles deviate from their intended route. The books are on sealed pallets fitted with alarms to prevent tampering.

P.S. If you click and are spoiled, don’t blame me. Blame your poor impulse control.

→ Jane
Previous article: REVIEW: Blood Red by Heather Graham
Next Post: It Is Not Enough to Write a Good Book