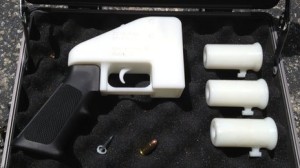 BBC News – Downloads for 3D-printed Liberator gun reach 100,000 – So last year I started writing about 3D printing and in October, someone posited that guns would soon be built with a push of a button and how difficult that would be to police.  BBC News

Some of you thought this was so far off as to not be a concern. But last week, a 3D gun aficionado showed off his 3D printed gun. Only the firing mechanism was not printed. And now the 3D plans are being downloaded and probably refined as we read this article. One thing you probably can’t 3D print is gunpowder.

There is a way to require all explosive materials be tagged through a chemical fingerprint but that isn’t the law in the US. If this isn’t making its way into a suspense book, I’ll be very disappointed. (On the IRL side, I find this pretty terrifying)

Lady Teenage Coder Fixes Your Twitter So No One Can Spoil Game of Thrones For You Again – Seventeen year old Jennie Lamere won the Boston hackathon for a 10 hour coding project she thought up and coded the night before the contest. Jennie went up against 80 other contestants, many competing in groups. The kicker? Jennie was the only female. Love. Tor.com

Microsoft Mulling Nook Media LLC Purchase For $1 Billion – Tech Crunch reports that internal documents indicate Microsoft is interested in buying Nook Media. While Publishers Lunch notes that some details are incorrect such as the valuation of BN and what would be included in the Nook Media sale, the MS bid for Nook Media has been confirmed by another source at the Times.

So despite some errors in TC’s writeup, the basis of the write up is spot on. The leaked documents also affirm what Mike Cane surmised last month and that is that BN is phasing out the Android tablets altogether. Nook Media, if enfolded into MS, will be a content platform that MS will market and, as paidContent speculates, a way to compete against Amazon, Apple, and Google. TechCrunch

→ Jane
Previous article: REVIEW: Dead Ever After by Charlaine Harris
Next Post: REVIEW: A Prior Engagement by Karina Bliss