Warning: mysqli_query(): (22032/3141): Invalid JSON text in argument 1 to function json_contains: "Invalid value." at position 0. in /home/customer/www/dearauthor.com/public_html/wp-includes/class-wpdb.php on line 2187
 Friday News: To boycott or not to boycott, Orson Scott Card calls for tolerance; ESPN to produce 9 short films to highlight females in sports; Is B&N doomed?
July 12, 2013

Friday News: To boycott or not to boycott, Orson Scott Card calls for tolerance; ESPN to produce 9 short films to highlight females in sports; Is B&N doomed?

Orson Scott Card’s on tolerance – Orson Scott Card has had a long history of being against gay marriage and homosexuality in general. His opinions were, in part, shaped by his Mormon religion. His statements have been outrageous and hurtful to the GLBT community (he once said that you become gay “through a disturbing seduction or rape or molestation or abuse.”) Card’s classic novel “Ender’s Game” is coming out in movie theatres and is currently the subject of a boycott.  He has a released a statement begging for tolerance from the LGBT community.

In fact, he writes a long essay on the intolerance of GLBT advocates  just a few months ago for Sunstone magazine. This is what  Card says about tolerating homosexuals:

Laws against homosexual behavior should remain on the books, not to be indiscriminately enforced against anyone who happens to be caught violating them, but to be used when necessary to send a clear message that those who flagrantly violate society’s regulation of sexual behavior cannot be permitted to remain as acceptable, equal citizens within that society.

The goal of the polity is not to put homosexuals in jail. The goal is to discourage people from engaging in homosexual practices in the first place, and, when they nevertheless proceed in their homosexual behavior, to encourage them to do so discreetly, so as not to shake the confidence of the community in the polity’s ability to provide rules for safe, stable, dependable marriage and family relationships.

The hypocrites of homosexuality are, of course, already preparing to answer these statements by accusing me of homophobia, gay-bashing, bigotry, intolerance; but nothing that I have said here — and nothing that has been said by any of the prophets or any of the Church leaders who have dealt with this issue — can be construed as advocating, encouraging, or even allowing harsh personal treatment of individuals who are unable to resist the temptation to have sexual relations with persons of the same sex. On the contrary, the teachings of the Lord are clear in regard to the way we must deal with sinners. Christ treated them with compassion — as long as they confessed that their sin was a sin. Only when they attempted to pretend that their sin was righteousness did he harshly name them for what they were: fools, hypocrites, sinners.

Using Card’s words and behaviors as an example, it makes sense to participate in the boycott, right? 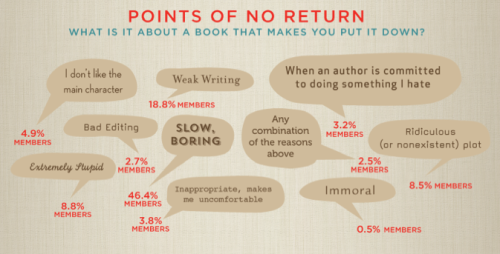 Goodreads | see what your friends are reading – Goodreads has an infographic of “the psychology of the abandoned read” based on the shelving habits of readers. The largest percentage people stop reading before 100 pages but a slightly larger percentage finish, no matter what. Where do you fall? Goodreads

The Most Influential Organization In Sports Takes A Second Shot At Gender Equality – As you all know by now, I’m a big sports fan. Football is my drug of choice, but I’ll watch them all, particularly during the playoffs. (The NBA Finals this year was unreal. We could have watched an 11 games series or maybe a 21 game series instead of the best of 7). I kind of have a love/hate relationship with ESPN. I really dislike some of their commentators and radio personalities. They often come off as sexist to say the least.

But one thing that ESPN does really well is the Emmy nominated 30 for 30 series. The Bo Jackson one was great as was the scandal at Southern Methodist University. Even if you don’t like sports, 30 on 30 is great program. Until recently, only a tiny portion of 30 on 30 has been about female athletes. To address this, ESPN is launching a Nine for IX documentary series to celebrate female athletes such as Billy Jean King and Venus Williams. Buzzfeed

Barnes & Noble’s troubles don’t show why bookstores are doomed. They show how they’ll survive. – Washington Post suggests that one model B&N could survive is to franchise the chain, offering communities ownership over the bookstore but benefiting “from the buying power and branding of a national distribution network.” While the headline is one of hope, the article seems to presuppose that B&N in its current state is doomed. The Washington Post

→ Jane
Previous article: REVIEW: Hotter Than Ever by Elle Kennedy
Next Post: REVIEW: The Story Guy by Mary Ann Rivers