Friday News: Sign up at a data collecting company to find out what data they are collecting about you and other news

Acxiom gives you a peek at the data it collects about you – So remember the stories about how Target can send a different mailer to you than it does to your neighbor based upon all the little footprints you leave in their store and on the internet? One of the data tracking companies is called Acxiom and you can fill out a form to find out some (but not all) of the data the company is compiling about you and selling to others. Tech News and Analysis

Sony’s PRS-T3 e-reader hands-on – Engadget has photos and mini review of Sony’s new eink reader. The case is built around the screen and the front light happens to be an integrated popup flashlight. For the readers who like buttons (and I know that there are some out there), there are page forward and backward, a home, a back, and a menu button. The casing is metal and lightweight. No word on price yet. Sony’s biggest market for these e ink readers is internationally. Engadget

PayPal’s new digital wallet app is powerful but baffling – The Verge says that the new Paypal app is designed to allow you to leave your wallet at home and pay with just your smartphone. Paypal stores all of your financial information in the cloud and allows you to order and pay from many stores like Jamba Juice just from your phone. I love this idea, but the Verge says the app is confusing and hard to learn. I love my Starbucks app that allows me to pay for anything within Starbucks with just my phone and I’d love that convenience to be extended to my other shopping but apparently while Paypal App may help in cutting out the wallet, you might need an entire class to learn how. The Verge 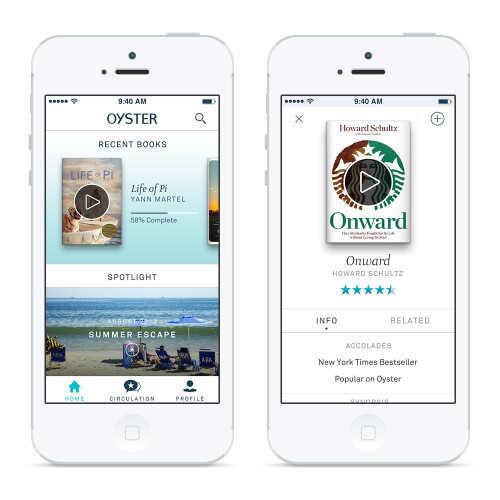 No, seriously: Oyster comes pretty close to being a Netflix for ebooks – Oyster is a subscription service that is touting a $9.95 per month price point and offering “real books.”  Currently their catalog includes titles from “HarperCollins, Houghton Mifflin Harcourt, Workman, Algonquin, Melville House, Rodale, Open Road, RosettaBooks, F+W Media and self-publishing distributor Smashwords.” It sounds like the Smashwords premium distribution catalog is available if you know what you are looking for but only select Smashword titles will be featured on the home screen.

Two problems. First, it is available only for the iPhone with iPad access coming but no plans for an Android app.  I’d pay for this. I sent an email to Oyster asking about the romance coverage. I will report back. Tech News and Analysis