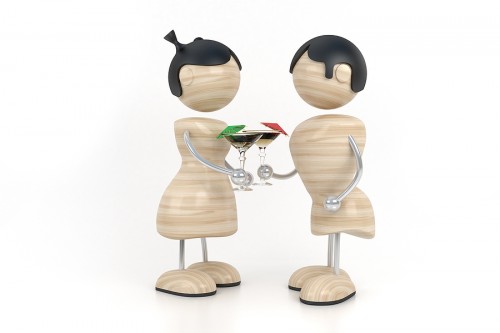 Win One of Ten Kindle Fires – Enter by July 23 for a chance to win one of 10 Kindle Fire devices, each accompanied by a $100 Amazon.com Gift Card. Use the Gift Card to load up your Kindle with the year’s best books, or choose from millions of other items at Amazon.com. We’ll randomly select the names of 10 winners on or about 7/24/12. Good luck! Amazon.com Facebook

Fake it ’til you make it in love – “A new study, published in the book, Rip It Up, has found that playing psychological games can encourage emotional closeness. For instance, acting ‘as if’ you find someone attractive increases the chances of them finding you attractive and of the two of you falling in love. In the study, 100 volunteers, who were all looking for love, participated in a speed-dating session. A portion of the participants were instructed to pretend they were already intimately acquainted by holding hands, sharing secrets and looking into each other’s eyes. At the end of the session the two groups were asked how close they felt to the people they had met and how many they would like to see again. Of those who partook in the conventional speed dating sessions only around 20 per cent said they would want to see one another again. The psychological games group, however more than doubled the success rate to 45 per cent.” The Age

Wives watch sports for husband’s sake, study reports – latimes.com – “The study, titled “Women (Not) Watching Women: Leisure Time, Television and Implications for Televised Coverage of Women’s Sports,” appeared Friday in the journal Communication, Culture and Critique and included 19 women in heterosexual marriages. Among other findings, the women expressed a preference for short, condensed sporting events, such as those in the Olympics, and said they gravitated toward traditionally “feminine” sports such as gymnastics and figure skating”  LA Times

How does a study based on 19 [insert expletive] women get published in a journal on anything?

Law professor examines Jay Z’s infamous ’99 Problems’ lyrics | theGrio – “Caleb Mason, an associate professor of law at Southwestern Law School has written a legal review of Jay Z’s infamous hit song “99 Problems”.  The song’s lyrics are intended to be a re-enactment of a traffic stop on the New Jersey highway where Jay-Z allegedly encountered a police officer who attempted to search the rapper’s car for drugs. Jay-Z maintains that the song is based on an actual event where he was able to evade search and seizure when the rapper was stopped while smuggling drugs in a hidden compartment in the sun roof of his vehicle.” The Grio

This is a fun law review article. The professor writes in his introduction:

99 Problems is a song by Jay-Z. It’s a good song. It was a big hit in 2004.2 I’m writing about it now because it’s time we added it to the canon of criminal procedure pedagogy. In one compact, teachable verse (Verse 2), the song forces us to think about traffic stops, vehicle searches, drug smuggling, probable cause, and racial profiling, and it beautifully tees up my favorite pedagogical heuristic: life lessons for cops and robbers. And as it turns out, I’m not late to the game after all: Jay-Z recently published a well-received volume of criticism and commentary that includes his own marginal notes on Verse 2 of 99 Problems.

Confronting the sexualization of girls and young women, SPARK team members are not afraid to speak up — and take action – Lifestyle – The Boston Globe – “In April, Waterville eighth-grader Julia Bluhm, 14, journeyed to Manhattan to protest Seventeen’s practice of retouching photos, making girls and young women look sexier and less flawed. After an interview with CNN, she was invited to the magazine to discuss her objections and spent an hour doing just that. Bluhm and her teammates at SPARK — which stands for Sexualization Protest: Action, Resistance, Knowledge — eventually collected more than 84,000 signatures on their anti-Photoshopping petition, distributed online through Change.org. After meeting with Bluhm and hearing from thousands of like-minded readers, Seventeen’s latest issue announced a Body Peace Treaty. The editors now promise to “never change girls’ body or face shapes,” to feature “real girls and models who are healthy” and to give readers a behind-the-scenes glimpse of how it shoots and edits photo spreads.” Boston Globe

Youth activism is making a positive change for all the kids in the world.  Don’t forget Martha Payne, a 9 year old blogger whose photos and ratings of her terrible school lunches has led to a re-examination of public school lunches in Scotland.