Alisa Valdes’ The Feminist and the Cowboy, reviewed – Alisa Valdes wrote a memoir wherein she extols the virtues of the “real man”.  The cowboy/hero was a real rancher, herding real cattle, and in his arms, she  finally found true physical and emotional happiness.  Valdes isn’t just talking about her own personal experience but extrapolating her one time sexual high into an anti feminist mantra:


Feminism may have covered our eyes with its “dreary shroud of lies,” but nature knows the truth, which is that men and women are different. After that, the revelations come fast: “We are the vessel. They are the elixir and the funnel. We are the earth. They are the plough and seed. They give, we take. We open, they enter.” Valdes, like all womankind, was “programmed, sexually and emotionally, to get excited by a man who took charge.” Her first night at the ranch, Al Green on the radio, the “angels sang arias” and “the earth moved.” She would tell you more details about that night, but the cowboy has forbidden it.

He cheats on her, but Valdes shrugs this off because his attractiveness to the other sex is ultimately a turn on.  But after the book has been released, Valdes wrote on a now deleted blog post that her romance with the cowboy is not only over, but that Valdes suffered emotional and likely physical abuse at his hands.

Mostly he stuck to verbal abuse, with occasional physical threats, but there is at least one incident which she doesn’t call rape, but which sure sounds like something close to it. Finally, Valdes realized that “this man did not love me. He could not love anyone,” and she left him for good—though, obviously, something of the terror remains. She notes that writing the post puts her “in danger—real physical danger.”

He broke up with her because he doesn’t want her anymore. Perhaps he will be visiting the woman who beckoned him to join her in the shower. Valdes says that the second part of the story is being worked out in her mind as a sequel to her memoir. Slate Magazine

Valdes’ experience raises all kinds of questions, both moral and philosophical.  In a second follow up piece (warning rape triggers), Valdes admits that the story was “a handbook for women on how to fall in love with a manipulative, controlling, abusive narcissist.”   But Valdes’ emails speak of a woman in need of an emotional intervention.  Her last words to the Slate columnist?  That she and her new boyfriend are grateful to the cowboy who has “tamed” her and made her into a better woman.  Reading the cached and deleted blog post that includes passages like this, one has to wonder what exactly she needed tamed:

[spoiler]he glared, called me a mouthy cunt, told me to get to my side of the bed and not touch him, told me that he couldn’t stand the sight of me, told me that if I really wanted to impress him then I’d be a good girl and just shut the fuck up, and his finger poking me in the chest, and then wagged in my face, telling me that my biggest problem, the reason he would never marry me after all, was that I was a woman who just didn’t know when to shut the fuck up, shut the fuck up, and me saying I would, that I would be quiet, and turning my back to him so he wouldn’t hear me cry, and him feeling the bed shake anyway and yelling at me that I was pathetic, that if I wanted him to stay then I better stop fucking crying[/spoiler]

Amazon Media Room – I guess this is a version of iTunes Match? Amazon will be giving customers free MP3 versions of CDs. If you purchase a CD from Amazon marked “AutoRip”, a digital version will be automatically and immediately added to your cloud library, free of charge.  Further, any past CDs purchased which are now “AutoRip” CDs will be grandfathered in. 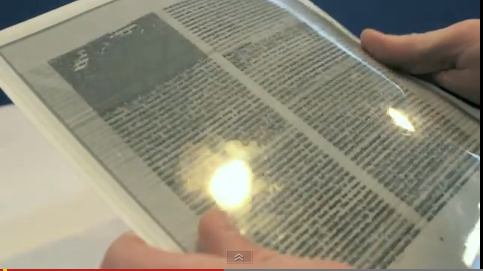 “Papertab” paper tablet is your flexible friend – Not sure what a flexible eink screen would be like? Me either but researchers at Queen’s University, Canada, has developed a prototype called the Papertab that is a “a fully interactive touch-sensitive 10.7-inch sheet of plastic able to display documents, images, videos and the like.” Stuff magazine