Random House asked me if I was interested in posting Molly O’Keefe’s cover for her next book. Why not? We enjoy O’Keefe’s books here at Dear Author. 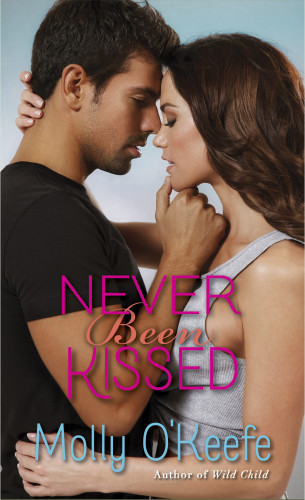 NEVER BEEN KISSED by Molly O’Keefe is her second novel in her exciting new series—The Boys of Bishop—and features an irresistible romance and unforgettable characters in a page-turning story that delivers equal parts emotion and humor . . . with a little edge to boot.

As the daughter of a wealthy politician, Ashley Montgomery has had enough of her parents’ expectations for her future and is going her own way, volunteering to work at a refugee camp in Africa. But her act of charity turns dangerous when she takes a boat trip and is abducted by Somali pirates.

Enter Brody Baxter, who was a bodyguard for the Montgomery family ten years ago and doesn’t think twice about coming to Ashley’s rescue. Handsome and tough, Brody has always done what needed to be done. So he swoops in, saves Ashley, and brings her to a place where she can rest and recuperate without the glare of the press and her demanding family: Brody’s small hometown of Bishop, Arkansas.

But Ashley soon realizes that she’s not the only one in need of healing. Holed up with Ashley in a tiny apartment over his brother’s bar in Bishop, Brody is tempted and torn in ways he never anticipated. Beautiful Ashley, vibrant despite her ordeal, fearless enough to love him beyond his wall of self-punishment, is now determined to save him. But with a little faith and a lot of love, they just may find happiness in each others’ arms.

Booksellers Respond to Amazon Source: “Die Amazon Die” – The Digital Reader – Amazon is trying to woo indie booksellers by offering 10% commission on ebooks and commission on Kindles sold. Despite these really favorable terms, indies responded predictably with gifs of bare asses and foam fingers. (Hey Amazon, I will be an indie associate bookseller for you!)

The terms are better than indies get from Kobo and there’s no question that Amazon moves a greater volume of digital units that Kobo by a factor of at least 50 or more. But will flogging Amazon products in store increase loyalty toward Amazon and away from the indie? That’s the indie concern and probably a legitimate one. The Digital Reader

Typography Book Explores What It Feels Like To Have Dyslexia – In a new book described as a cross between a coffee table book and a textbook by the author aims to educate people on what dyslexia actually looks like to those who suffer it. Even the excerpts were really illuminating for me. The author is looking for $23,000 in Kickstarter funding. I’m surprised some publisher wouldn’t be willing to take this on. It seems something like this should be in every library and school around. Huffington Post

Analysis reveals popular Adobe passwords – In October Adobe sustained a serious breach in its security when hackers accessed Adobe’s source code. Adobe ended up disabling up to 150 million accounts and won’t activate them until each account has its password changed.

One of the upshots of this is that security experts are analyzing the account information and a small but significant portion of Adobe accounts had tremendously bad passwords. Nearly two million used 123456 BBC News

McDonalds Wants 3D Printers – I think that our kids are catered too far too much and getting exactly the right toy in a Happy Meal is overkill, but McDonald’s application of 3D printing in the mass consumption is both interesting and telling.

From a cost standpoint, it must be cheap enough to accommodate this type of process. From a business standpoint, it means that businesses are taking a serious look at this technology to see how it can be implemented in day to day commerce. Business Insider