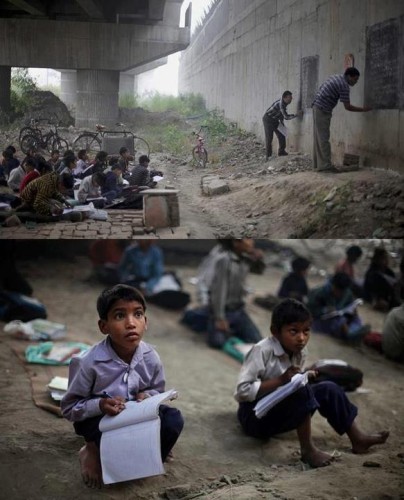 I came across this picture and this video while browsing Reddit.  Rajesh Kumar Sharma founded a free school in the slums of India.  Their schoolroom is a space under a bridge.  Their blackboards are concrete walls.  First world problems are anything that doesn’t include having to gain an education under a bridge in a slum.

Judge: No Jury for Penguin in E-book Case – Penguin had argued that a settlement with the DOJ necessitated a jury trial in the suits brought by the State Attorneys General and class action. Cote has denied this and ordered Penguin to appear at trial with Apple on June 3. Likely this will result in Penguin’s settlement of all the other claims. (At least, that would be my best guess) Likely the cash settlement that the State AGs are demanding is what had Penguin initially balking. The settlement with the DOJ required no outflow of cash. But the settlement with the State AGs will have to come with some kind of contribution to the consumer rebate fund and likely in excess of $50 million given what other publishers have had to pay. Publishers Weekly

Digital Strategy in Historical Romance – Courtney Milan argues that Avon’s rigorous discounting of its historicals is making a difference in the success of its book. Digitally, Avon is selling more historical books than any other publisher. Milan argues that is because of price and that Avon wasn’t dominating two years ago like it is dominating now.


I disagree with Milan on a several points but my concern about historical isn’t whether existing author platforms can be boosted by discounted pricing but rather the malaise in the historical sub genre. Other than a few voices, the genre seems stagnating and the positive numbers generated rest primarily on the same authors repetitive success.  Stephanie Laurens, not so long ago argued that reduced prices would harm her established readership and she didn’t find that her established readers were digitally entrenched.  Her mind may have been changed as many of her books have been temporarily reduced frequently. It’s hard not to run into a reduced Stephanie Laurens book.

I’m not convinced that mere pricing will herald a rise in historical books.  We need new storytelling within the historical romance genre. One reader told me she thought Regency historicals have become a bad parody of themselves. I’d hope digital strategy isn’t based on price alone and reselling backlist titles at lower prices.  What I do agree is that Avon has been successfully pushing certain books by aggressive backlist pricing. Kind of what Samhain has done for years with its free promotions. Should other publishers do what Avon does? Sure, it can’t hurt. Particularly when you aren’t seeing the numbers Avon is putting out (but that’s just for its historical authors where Avon has long been dominant).

Digital strategy should also include experimenting with content to capture new audiences.  The latter might be wishful thinking on my part.  I keep waiting for great self published authors to break down the historical gates and really shake things up.  Courtney Milan’s Blog

Shelf Awareness for Thursday, April 25, 2013 – Publishers Advertising and Marketing Association hosted a panel discussion about the emerging New Adult genre. Rest assured that even the panelists haven’t concurred on exactly what it is. Amy Tannenbaum, former editor at Atria and now agent, says it is for individuals of a certain age group who “don’t have to think about the consequences of their actions the way adults do.” As you might guess, I’d disagree with that statement.  Cindy Hwang, executive editor with Berkley, describes them as coming of age stories set after high school, either in college or just out.

Both agree that we haven’t seen the market peak yet. William & Morrow notes that these books are marketed to adults and so the question is whether brick and mortar will find a place for these stories.  Shelf Awareness

World’s First ‘Braille Smartphone’ in Development – Sumit Dagar along with IIT Delhi on the prototype is designing a smartphone that is specifically designed to aid those who are sight impaired. The phone’s screen will have a grid of pins which will form Braille shapes and characters for SMS and email and possibly more. The device has a planned release date of the end of 2013 and a price tag of $185. Mashable