Amazon.com: New Adult & College: Kindle Store – Amazon rolled out a few new categories to its bookstore yesterday including New Adult & College and Sports filed under Romance. I think this is a great start and I’m glad to see Amazon move away from the BISAC codes to be more responsive to the consumers.  It’s unknown how Amazon is filling these categories. One self published author informed me that you couldn’t choose to have your book placed in the New Adult category or the sports romance category.


This is just another sign of how nimble Amazon is.  I was told it took two years for BN to roll out the Teen Paranormal change in its stores and now that Teen PNR is on the decline, BN may be feeling shy of making any in store change but being quick to respond in retail is more important today than ever.  Target is rumored to be taking more NA books.  J.A. Rederminki’s Edge of Never, picked up by Grand Central, will spotlighted in store buy this summer.

Categories are all about helping the reader find the right book. Hopefully as New Adult grows and matures and changes, it will be become its own category and we can find romance as a subheading along with fantasy, historicals and others. (As an aside, I was pitched an NA historical the other day that I plan to read. Will report back.) Amazon

10 Biggest Book Adaptation Flops – Gabe Habash put together a list of the 10 Biggest Book to Movie flops and Beautiful Creatures by Kami Garcia isn’t on the list. Instead there is a list of movies that, as one commenter put it, I didn’t even realize had been made. One is Pinnochio. PWxyz

Representative Review Quote: “I can’t say this enough: This movie is about an adult male dressed in pink jammies.” -Washington Post 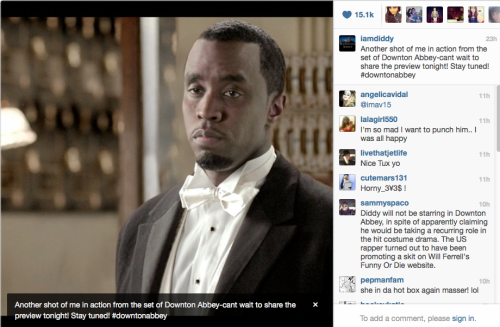 Diddy Just Wrote Himself Into Downton Abbey – Yesterday P Diddy tweeted that he was going to be in Downton Abbey and tweeted a couple of pictures of himself in what he said was a scene from DA. The internet went crazy but it was all part of a spoof for Funny or Die. I’m not sure if P Diddy is the right actor for DA, but it would have been awesome if he was a recurring character. Vulture

Economics, Game Theory and Jane Austen – Lisa sent me this link of economist Michael Chwe discussing the connection between game theory and Jane Austen. Game theory is a concept by which people try to guess an outcome based upon rational decisions players make. It’s been used in politics, economics, and behavioral science. Chwe says Austen was a game theorist, interested in the choices people make and how they can anticipate the choices others make and move accordingly.

For example, what distinguishes game theory, and economics generally, from other social science approaches is its emphasis on individual choice. That’s how economists explain behavior. For Austen, choice is an obsession. She mentions “the power of choice” and states that it is “a great deal better to chuse than to be chosen.”

When Fanny Price, in “Mansfield Park,” receives the proposal of the rich but smarmy Henry Crawford, her entire adoptive family pressures her to accept, but Fanny heroically resists, telling her uncle Sir Thomas that it is simply her choice: “I — I cannot like him, sir, well enough to marry him.”

Economists love results that are not intuitive. One such result, which still gives people pause, is that a country technologically worse at producing everything should still trade with a technologically superior country — as long as it has a comparative advantage in producing one good relative to another.

→ Jane
Previous article: REVIEW: True to the Law by Jo Goodman
Next Post: REVIEW: The Rebound Girl by Tamara Morgan