Update: A reader mentioned that I forgot to point out that Barnes and Noble is having a groupon where you pay $10 for a $20 gift certificate that can be used on anything. Be sure to use your Groupon before April 10, 2011.

India may be the fastest growing market for English language books but the digital craze isn’t gaining a foothold there yet or so say the major publishers in India.

The sales of digital books in India is expected to pick up in coming months but that will not impact the aficionados love for hardcover books as has been the case in the West, say major publishers here.India may see good rise in sales of digital books as downloading them on mobiles becomes a possibility but their growth trajectory may not be same as in the West, they say.

As I understand it, India is replete with cell phone users but whether cell phones = ebook adoption remains to be seen.

The New York Times unveiled its new set of Bestseller lists this week to be published in the Sunday issue.   There are several new additions:

Strangely, the Times will not count any individual vendor sales such as self published books citing “market instability” as the reason.   I think that is a bunch of hooey, but this is the Times and the Times list is what they want to make it, damn the market reality and all.   So the ebook and print list doesn’t represent a huge change given that the Times is excising a big portion of the ebook market.

Having said that, there were some interesting findings.   For example, Catherine Anderson’s book, Here to Stay, was number 3 on the mass market list but 23 on the ebook plus print list and did not appear on the ebook bestseller list at all suggesting that her numbers are primarily built upon print sales.   Susan Elizabeth Phillips made it to 12 on the NYT hardcover list and 31 on the ebook + print list but like Catherine Anderson, did not generate enough ebook sales to make it onto the Times list.   Conversely Nalini Singh’s Archangel’s Consort was number 8 on the mass market list and number 18 on the print + ebook and number 18 on the ebook only list.

This week’s list is dominated by thrillers and mysteries.   In fact, of 96 slots on the mass market, hardcover, ebook, and ebook + print list, 51 were filled with either thrillers or mysteries titles compared to 24 titles with a romance designation.

Book By You is a personalised romance novel service wherein you fill out a questionnaire and receive a romance novel starring you and the hero/heroine of your choice.   The reason I am mentioning it is because the services is now offering a gay and a lesbian title.   While I am not a fan of the service myself, I am glad to see that they are recognizing all sorts of love:

To spice things up in time for Valentine's Day, the company has just released a couple of hot, steamy same-sex novels catering to gay and lesbian readers.

Our friend and fellow reader, Keishon, is shutting down her romance blog to focus on her current love: mysteries, thrillers and crime fiction.   Keishon started the To Be Read challenge and is one of my inspirations for blogging. I am glad that she isn’t leaving the blogging scene entirely.   You can still find Keishon at Yet Another Crime Fiction Blog. 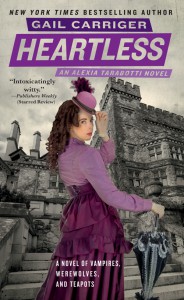 Generally, I think Orbit is a genius imprint.   They do cool things and great promotions (think the online paper doll thing for Gail Carriger’s series) and I think that their publishing blog is one of the best in the business.   Their covers are great.   Amanda Downum’s covers, in particular, are just striking.   I’m not a huge fan of fantasy and science fiction, but their blog posts are so interesting, I still follow along.   I think because I have such high expectations, I was struck nearly dumb by the really awful cover for Gail Carriger’s next book, UHeartless.   The hair looks like a wig that is about to fall off and the face is too realistic for the cover. It looks like a bad SIM.   I don’t know what happened here.