Some of you might have noticed, on the top of the Samhain website page there is information and a link for the poll about the Sammie Awards this year. PGo vote for your   favorite Samhain titles in 2009.

Macmillan ratchets it up the debate by putting a full page ad in the NYTimes for Atul Gawande’s latest book and placing the text “Available everywhere but Amazon.”

Barry Eisler analyzes publisher position v. digital tides. Don’t be deceived by the narratives, he says, as they are all self serving. The digital tide, however, cannot be stemmed and publishers need to go on the offense

Earthworks are a static defense. Publishers can do a few things to make the walls marginally higher and thicker, but that’s about it. Meanwhile, the force of the digital tide is always increasing. Eventually, a kinetic and ever stronger offense will overwhelm a static, finite defense

Hachette moves to the agency business model and in a letter to agents:

It’s important to note that we are not looking to the agency model as a way to make more money on e-books. In fact, we make less on each e-book sale under the new model; the author will continue to be fairly compensated and our e-book agents will make money on every digital sale. We’re willing to accept lower return for e-book sales as we control the value of our product–books, and content in general. We’re taking the long view on e-book pricing, and this new model helps protect the long term viability of the book marketplace.

This article suggests that the increased ebook prices will result in a boon to readers:

The economics of the agency model mean that everyone-‘readers, authors, publishers, and Amazon-‘will gain if trade paperbacks are sold at $9.99.

That would still leave room for front list e-books at $12.99 or $14.99, a great discount over the physical book price.

We also know that there is a very vocal faction of putative Kindle owners-‘one suspects many are not actual owners of e-readers but simply Internet entitlement zealots-‘who believe e-books must be significantly cheaper than physical books to garner sales.

Really? Only Internet entitlement zealots believe ebooks must be cheaper to get sales?

Washington Post says that Apple won in this battle between Amazon and Macmillan and I think they are right.

The Apple iPad isn’t even available yet, but already it is forcing Amazon to respond in a variety of ways to protect its competing Kindle eBook business….
Amazon cannot afford to lose this war. Not so much because of the potential revenue impact this year, but because as digital books become more popular they will become a bigger part of Amazon’s business than of Apple’s.

And if you think physical books are the way of the future, then you're unaware of the towns that no longer sport a bookstore, like Laredo, TX, you're unaware that library hours are shortening, that Borders is on the bring of bankruptcy and Barnes & Noble might soon be taken over. The publishers are too ignorant to even see what's going on. They're running into the arms of Apple to avoid Amazon.

The Wrap suggests the battle for higher ebook prices is already lost:

"I think Amazon has quite successfully burned the $9.99 price point into the brains of digital readers," said Jason Boog, editor of mediabistro.com's book industry blog, GalleyCat. "If people are actively organizing boycotts against a certain price point, for better or for worse, Amazon has already won the price war."

"Amazon has done a great job of marketing the illusion that an e-book should be $9.99," [Sarah] Weinman [of Daily Finance] said. "So how can publishers tell consumers, in clear terms, why $9.99 is bad and convince them that discount culture shouldn’t screw over the authors they profess to love?"

Australia’s federal court has issued a ruling that negates the responsibility for ISPs to engage in enforcement.

In a definitive defeat for film studios-‘and in a first case of its kind worldwide-‘Australia’s Federal Court has ruled that ISPs have no obligation to act on copyright infringement notices or to disconnect subscribers after receiving multiple letters. If copyright holders want justice for illegal file-sharing, they need to start by targeting the right people: those who committed the infringement.

iiNet’s win in its civil case against the Australian Federation Against Copyright Theft (AFACT) in the Federal Court of Australia is just the start of a potentially long legal war, according to a Melbourne University copyright law expert.

D Packman, former CEO of eMusic says that publishers pricing ebooks higher are in for a sad reality:

Remembering your Econ class, you also know that most goods are elastic; as price lowers, demand increases. An optimum point exist that maximizes profit. I am pretty sure that the book industry, like the music industry before it, has not maximized profit by finding the optimum price. This is generally because the book publishers are not retailers -‘ they have never forged a relationship directly with a customer. To optimize pricing (particularly on a per title basis), you need to conduct lots of tests and analyze lots of data. Amazon does this in near-real time and, I am told, is constantly optimizing pricing, page layout, merchandising, bundling, shopping cart path, and many other ecommerce variables.

Sidenote: Is this all a crazy ploy to get us readers to be happy about windowing (the delayed release of ebooks?)

Steve Axelrod who reps bigtime authors like Julia Quinn, Suzanne Brockmann, Susan Elizabeth Phillips (you know, big trade authors important to publishers) isn’t thrilled with the whole agency model because he, like Macintosh of Random House, isn’t convinced publishers know what they are doing in regards to pricing. He lays out 6 reasons why moving to the Agency model sounds like a mistake.

Kobo books has a post up about price elasticity at its blog.

Publishers have never done pricing without the safety net of retailers making adjustments to optimize consumer demand. Retailers spend a great deal of time on price analysis/optimization. As we work with publishers on agency, continuous review of price/purchase behaviour is going to be essential. Daily/weekly, not monthly/quarterly.

Books price $11 and on face a sad downward decline in sales numbers until it sort of flatlines. Kobo calls this “The Barren, Rocky Plain of Publisher Wishful Thinking.” 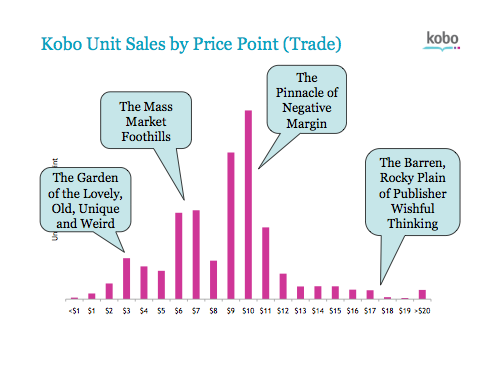 I think this is Kobo’s “Danger, Will Robinson” call.

"Publisher's Pledge is a reaffirmation of the business model Dorchester has always prided itself on," stated Brooke Borneman, Director of Sales and Marketing. "Our strength has been identifying emerging voices and trends in the industry rather than chasing bestsellers. Our intent is to reestablish ourselves in the market as the publisher authors and agents turn to first to introduce new talent.

I thought the press release was a bit ironic given that it pointed to the names that they discovered and then sold recently to Avon. The books in the Publisher’s Pledge will be sold with a “money back guarantee”.

The first Publisher's Pledge title will be Barbara Monajem's Sunrise in a Garden of Love & Evil (April 2010), an erotically charged urban fantasy in the same vein as Charlaine Harris. Additional titles include Elisabeth Naughton's Marked (May 2010), a darkly sensual paranormal romance inspired by Greek mythology that will appeal to fans of Sherrilyn Kenyon; Christie Craig's Shut Up and Kiss Me (June 2010), a delightfully quirky romantic mystery that will appeal to fans of Janet Evanovich; and Erin Kellison's back-to-back debuts Shadow Bound (July 2010) and Shadow Fall (August 2010), the first two releases in a riveting post-apocalyptic series that fuses dark fantasy, science fiction, horror and romantic suspense.