Barnes & Noble 1st-quarter loss more than doubles; Riggio calls off bid for retail stores –  Yesterday’s earnings call was a complete 180 from the information given out in June of 2013.  Yes, not just two months ago, BN was looking to offload its tablet business even though no one really thought that was a good idea.  Laura Hazard Owen called the investors’ call a trainwreck.

What we know today is that revenue fell 10 percent at the retail stores and nook revenue fell 29 percent.  BN says to expece revenue in stores open at least one year to fall “fall in the high single digit percentage range at retail stores and the low single digits at college stores. Michael Huseby, president of Barnes & Noble and CEO of Nook Media, said the company plans to release at least one new Nook device during the upcoming holiday season.” The Washington Post

BN.com will be relaunched next year and BN is currently saying that they are back in the tablet business “If we want to be in the content business we need to be in the device business, no matter how they’re produced. We think we produce better devices than anybody else.”

So no spin off of Nook Media. No cessation of tablet devices. A ramp up of new media contracts.  Who knows, right?

Speaking of BN, some self published authors have reported issues with Nook Press.  It would be one thing if these were unknowns but one of the authors having issues is Tammara Webber who’s book “Here Without You” had an official release date of August 6.  It went live everywhere but BN and despite multiple emails and requests for assistance, the book did not go live until yesterday evening after Webber finally went public with her frustration.  This is also true for other authors.

One author who has self published a successful novel reported that she contacted Nook Press 4 times since she pressed the publish button and received nothing but assurances that the issue would be looked into. That was a week ago.  There is no phone number and no email address for assistance. Nook Press requires authors to use an online chat feature for help but there is almost no help forthcoming.

Delaying sales on the Nook Press platform only provides incentive for authors to go Amazon exclusive and given the popularity of self published books with digital readers, the failure to promptly publish these books will reduce the viability of the Nook as a digital publishing platform.

Also from my inbox, Noble Romance is shutting its doors. The email I received says “We are not insolvent, we are not going bankrupt, we simply have decided that we no longer wish to be in the business and therefore we will be exiting this business in a professional, orderly fashion.

Over the next 30 days, we will remove all books for sale through all sales channels.

We will continue to send monthly royalty statements out and pay all royalties owed until all payments have been collected. We anticipate that this could be as soon as October, but we do not completely control third party sales.

Once this process is complete, this means that your rights will automatically revert to you per our agreement and if you need a letter confirming this, please email us and we will be happy to provide you one.”

Open Road Media put together this fun Venn Diagram of cross genre books. Each of these books is on sale for $1.99 from August 20 through August 26.

I thought the DA readership would enjoy the quirkiness of it. 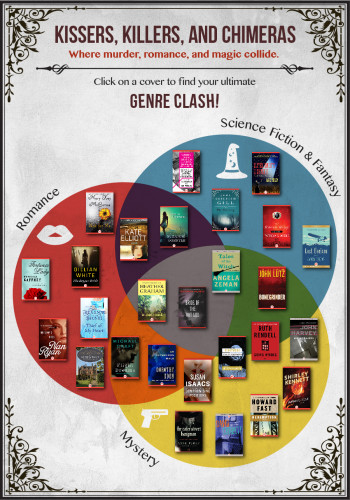 → Jane
Previous article: Daily Deals: A melange of books from historical romance to a highly praised mystery / thriller
Next Post: REVIEW: Slave Auction: Spaced Out for Love by Stormy Glenn