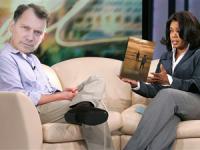 Bill Schneider is the author of three self published books. Like many self published, debut and midlist authors, Schneider is toiling in obscurity. So he did what any possibly neurotic, desperate, and not terribly ethical author would do and began telling people that his book, Crossed Paths, a gay love story set in 1976, was an Oprah Book Club pick. The hoax was taken to another level when he posted on his website that he was on Oprah in May 2007 and provided a five page transcript of the conversation.

Schneider was confronted by journalists at Weekly Dig about the lack of information regarding his appearance on Oprah, his poor Amazon ranking, and the fact that no one has seemed to have heard of his book. Schneider replied that he thought the episode aired on June 18 but that the reporter should check with his publicist. (I found the idea that Schneider had a publicist even a hoot). Harpo spokeswoman refuted Scheiders’ claim.

Since the hoax has been exposed, the transcript has been taken down but through the power of Google Cache, its still alive on the internet. Authors behaving desperately is funny stuff.

Oprah: Bill, I must tell you that I immediately fell in love with this book when I first read it.

Schneider: Thank you. Thanks very much.

Oprah: Crossed Paths is truly a gem of story. Tell me how you came to write this very poignant book …

Oprah: I was very impressed with how well you developed the characters in Crossed Paths.

Oprah: How did you do that?

Schneider: Well, when you strip away all of the layers of stuff that make us appear to be who we want others to believe we are, there is, ah, a pretty basic element that remains.

Oprah: Now tell us what happened to Will and –

Oprah: – I almost said Will and Grace –

Schneider: — That was a TV show – Crossed Paths is a novelette –

Via Weekly Dig by way of GalleyCat.