Our recent post with the luscious Asian mantitty reminded me that I’ve wanted to review this one for ages. Okay, prepare your brickbats now because this time I’m sure that a lot of you are going to disagree with my grade for this one. It’s beautiful, the costumes are lovely, the scenery is gorgeous but there’s just something missing here for me. Mei (Ziyi Zhang) is an exotic, beautiful blind dancer, associated with a dangerous revolutionary gang known as The House of Flying Daggers. Ordered to find and kill the group’s leader, two officers, Jin (Takeshi Kaneshiro) and Lao (Andy Lau), of the dying, decadent Tang Dynasty, hatch a plot to arrest Mei after which Jin will “help” her escape hoping she will then lead them to the gang. Mei finds herself both threatened by – and attracted – to the flirtatious Jin as they battle against the Tang soldiers. For his part, Jin begins to have feelings for this woman he must ultimately betray. But Mei isn’t the only one hiding her true self as a third person begins to figure into the equation. Their hearts and loyalties battle each other, amid warriors in the treetops and dazzling combat on the ground. But as Mei tells one of the men, if we meet again, one of us will die. 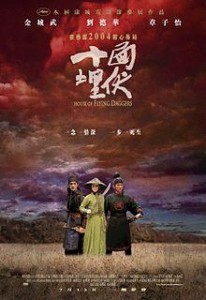 Almost every review or comment I’ve read about “House of Flying Daggers” mentions how beautiful it is. And it is. Great care and time were spent on making it that way. The costumes were researched and are supposed to be Tang period perfect – the styles as well as the colors as seen especially in the Peony Pavilion scenes. The two dresses worn by Zhang in the brothel are simply stunning. The Dagger personnel look like living bamboo canes in their green robes and handmade bamboo hats. The courtesans of the Peony Pavilion are brightly dressed and flirtatious. The soldiers look sharp and dangerous in their dark green uniforms. Oh, and let’s not forget the outside stuff. A more menacing bamboo grove could not be found for the amazing acrobatic combat that takes place there. The birch forest is stunning in its autumn array of gold and orange leaves. The ultimately fortuitous snowfall provides a perfect place for the final fight which deviates from the usual balletic, martial arts grace and instead becomes a slugfest, mano-a-mano test of brute strength. Not only are all these elements lovely to look at but the fight scenes are beautiful as well being carefully choreographed and filmed. Though it does seem to me that there’s less wire work in this than in CT,HD – or maybe it’s just not quite as obvious. Zhang dances in the classical Chinese “sleeve” style – though I’m sure it has a specific title that I haven’t looked into yet. The echo dance is more martial arts than classic style dancing and in the fight scene that follows, Mei is like Ginger Rogers dancing the same moves with Fred Astaire but in heels in that Mei has to do everything Lao does but she also has to do it with long sleeves. Soldiers seemingly race across tree tops and scamper up and down the bamboo. The horseback fight between four men and Mei looks to be as frightening as Zhang says it was to film. And both she and Lao throw their daggers like heat seeking boomerang missiles. I also love the horseback “flower picking” shots. I do love a man who brings me flowers. But despite all this visual wealth, for most of the film I find myself feeling somewhat at a distance from these characters and their emotions. Perhaps this is my lack of knowledge of Chinese culture. Maybe it’s that I find it hard to warm up to Ziyi Zhang. I did find that a second viewing helped me pick up on subtle details and really made a difference in how I felt about (the superb) Andy Lau’s performance. Still, when all is said and done and I’ve drooled over Kaneshiro a bit more (Here, Takeshi, let me help you take that jacket off for the love scene), I don’t find this film as emotionally engaging as other Chinese films I’ve seen and added to my movie collection. There is, however, a lot to be said for the yummy eye candy factor of the actors.

→ Jayne
Previous article: Thursday News: SMP Was to Receive $70,000 Worth of Pot
Next Post: REVIEW: Tessa Masterson Will Go to Prom by Emily Franklin and Brendan Halpin