PRIDE WEEK: Friday Film Review: If These Walls Could Talk 2

If These Walls Could Talk 2 (2000)
Genre: GBLT Social Dramedy
Grade: B Frankly I put this one in my Netflix queue because after enjoying “Saving Face” I was looking for another lesbian centered movie and this one seemed to have gotten fairly good reviews while many others had been panned. It also features several strong actresses who I knew would probably turn in good performances. The potential downside was that since there are three short vignettes, it might turn out to be like a book anthology with not enough time devoted to each story. In 1961, Edith (Vanessa Redgrave) loses her longtime companion Abbie (Marian Seldes) and must face the issues of kinship and inheritance. In the 1970s, collegiate Linda (Michelle Williams) falls for butch townie Amy (Chloë Sevigny) then has to choose between her feminist friends or her lover. And in 2000, the house’s inhabitants Kal and Fran (Ellen DeGeneres, Sharon Stone) want to become parents. The first part is easily the strongest dramatically. Ironically it opens with the two women in a movie theater watching “The Children’s Hour” as later it’s revealed that they are former school teachers. Abbie dies after a freak accident and Edith must then try and conceal their relationship even as she struggles to deal with the legal issues of a couple who have no legal rights of survivorship. Suddenly she has no say as her lover’s laid to rest and no claim to a house in which she’s lived for decades. Elizabeth Perkins and Paul Giamatti play Abbie’s closest relations but it’s obvious they didn’t know her at all while the one person who did can’t claim Abbie for who she truly was. One of the saddest things is watching Edith stage the house before their arrival in order to hide all traces of the relationship. One of the most moving is how as an actress Redgrave has the courage to “ugly weep.” Her face and movements convey volumes of information throughout it all. 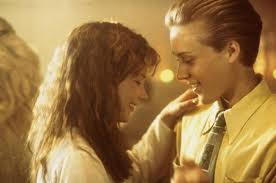 In part two, lesbians are now coming out in society and don’t have to hide who and what they are anymore. In fact these women are almost militantly out on the campus of the university they attend. But it seems they only accept lesbians who are like themselves and when their friend begins a tentative relationship with a woman who feels more comfortable dressed in masculine clothes, they’re almost comical in their efforts to control Linda and shun Amy. I guess it’s about lesbians overcoming their own homophobias but it seemed more overwrought and petty to me. However the sexuality is ramped up though it seems gratuitous and the time could have been spent better exploring more from Amy’s POV. The last part is the funniest and sexiest. Now lesbians are accepted in society to the point that the need for either total concealment or ‘in your face’ outness is pretty much past. The focus is on their personal issues rather than their sexual ones. Having never gone through it, I’m not sure if all the sperm bank issues are realistic though I would think not. I did laugh at the twist of the men who had originally been chosen as donors insisting on parental rights since news stories are full of men who refuse to take any responsibility for their offspring. The scene of Stone boiling the turkey baster while DeGeneris slowly cruised home with the donor sperm all done to the Eurythmics’ song “Sisters Are Doin’ It for Themselves” had me cracking up with laughter.

The stories follow the progression of lesbianism in society from 1. not out/discussed and dark in feeling to 2. out and not so dark in feeling as lesbian sexual roles are being explored to 3. totally out and with the freedom to be light and funny. There are obviously Issues being brought up in each segment with Points Being Made but except for short – and unfortunately slightly preachy -speeches in each one, I didn’t feel I was being sledgehammered over the head to makes sure I got it. I honestly wasn’t sure what to expect from these stories but found myself moved – at least by the first and last parts. Redgrave won several awards for this part and I can easily see why. Honestly, except for Amy’s character, the young and silly twits in part two made me want to slap them. But maybe that’s the point – they’re young and still defining themselves as people at that age. Nevertheless were I to watch it again, I would skip this part. DeGeneris tones down her silly for her role which actually made her funnier to me while Stone gets to play giddy which works most of the time. So for the parts I liked B+s and the one I could leave C+.