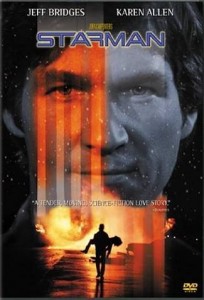 Jeff Bridges’ star turn in CRAZY HEART got me thinking about all his other movies I’d enjoyed. From my memory banks, I pulled a favorite I had seen but once, STARMAN. Would it be as sweet a romance on second viewing? But first, I had to find a copy and as luck is, well, fortunate sometimes, a VHS tape for a dollar landed on the library’s used book sale table. Happy, lucky, me.

Karen Allen’s star may have been ascendant in 1984 after her turn in RAIDERS OF THE LOST ARK 3 years previous, but according to the bio on imdb.com, she has repeatedly preferred the stage and smaller roles. Therefore, except for STARMAN, she slipped off my radar. Jeff Bridges never did slip off my radar, but then maybe that’s just me. The third actor of note in this production is Charles Martin Smith, someone else I’ve found interesting since he played Farley Mowat in NEVER CRY WOLF.

1984 was the middle of the space movies. STAR WARS, CLOSE ENCOUNTERS OF THE THIRD KIND, TRON, all the STAR TREKs… why not make another space show?

Jenny Hayden (Allen) sits half-dressed in her Wisconsin living room at night, smoking and drinking red wine, watching home movies of her late husband (Bridges as Scott) mugging for the camera. She’s lonely and miserable. Bridges, meanwhile, is an alien coming to Earth to check out if we meant it when we launched Voyager 2 in August of 1977 with the invitation to “come and see us sometime.” Or words to that effect.

His spacecraft trail is picked up by NORAD, fighters are scrambled, and Mark Shermin (Smith) of SETI is called.

While the government boys are getting their act together and Jenny Hayden is sleeping it off, our hero is watching the home movie and flipping through the pages of the photo album. He clones himself into Jenny’s husband, Scott, growing from baby to man before our horrified eyes. 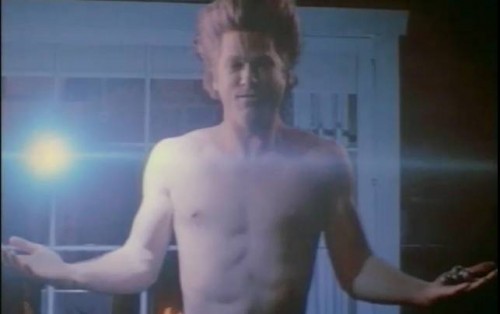 She awakens, is terrified not only that there’s a man in the house, but that he looks like Scott. Realizing that he’s way off course, our new Scott needs her to help him get to Meteor Crater in Arizona where the mother ship will pick him up in three days’ time. Our ticking clock is set because if he’s late, he will die. Jenny isn’t hot on this idea—can you spell kidnap?—but off they go. The government, portrayed as usual as hard-hearted experimenters, and good guy Shermin are on their trail.

We quickly find out that the little magic marbles in the new Scott’s possession are capable of many things. He discourages a would-be rescuer by turning a big wrench into a hot poker and bringing a doe, strapped to the hood of the hunter’s car, back to life. (This does not go over well with said hunter.)

Jenny’s curiosity about him grows, even as he shows her that she will not be leaving him, no matter her kidnap scribble on a bathroom mirror. There are the usual language confusions, delivered in classic Bridges’ deadpan style: “Take it easy”; “up yours”. She teaches him to read the map in case something should happen to her because she is still planning on escaping. But seeing him be beaten by the hunter and his buddies changes her mind and now she rescues him.

The police almost catch up with them at a Holiday Inn, Jenny is hit by a police bullet, there’s an explosion at a roadblock and he walks out of the fire carrying her.

By now, we’re at Grand Junction, CO, where they’ve hitched a ride in a mobile home. He has two marbles left, uses one to revive her from the bullet wound, then gets a ride, leaving her at a truck stop. Of course, she finds a ride to follow. There’s another road block, another explosion, and they’re hitching a ride in the back of a truck. Rain, wet clothes, boxcar, wet clothes off, they make love. He “gives her a baby”, although she’s told him she can’t have children. He tells her the child will be the human Scott’s child but will know all that Starman knows and be a teacher.

They’re so happy with each other on the train that they overshoot their mark and land in Las Vegas. Nothing for him to jigger a slot machine and with their new found wealth, they buy a Cadillac and take off again.

Are you exhausted yet?

There’s an eventual meeting with Shermin at a coffee stop where Starman tells him that we’ve been visited before and that we are a “strange species,” at our very best when things are worst. But he’s slowing down and dying. Shermin helps them escape and they arrive—finally—at Meteor Crater. There’s all the usual chase staples that we’ve come to expect from this genre—helicopters, the mother ship, the red beam, the final kiss and “I love you”, and the hand-off of the last marble which the baby will know what to do with.

And Jenny Hayden is alone once more.

I love old and older movies for many things, but chiefly the glimpses back into the way it was. There are no cell phones. They read a MAP to get to Arizona. The Amoco gas station is full service. Remember that? Amoco? Full service?

So how did STARMAN hold up for me? As a piece of science fiction, not as well as I had hoped. CGI has spoiled us all. As a romance, I think it did better. Two strangers, trapped in a car, a road trip, the slow growth of trust and then love. Call me sentimental, but I’ll give it a B+.

STARMAN is available on DVD in several iterations and for instant streaming by Amazon Prime members. Or, you could get lucky and find an original VHS tape for a dollar at your local library’s used book sale.
From Kay Sisk