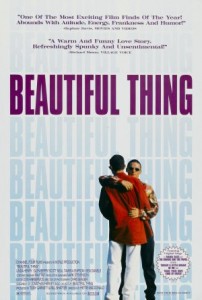 Note for most viewers: Turn the subtitles ON!

I’ve had this film in my Netflix queue for awhile because of recs made here after Sarah’s review of “Latter Days” and when she told me about what she wants to do for next Monday, I zipped it up to a top spot so I could get the ball rolling. Like an earlier GLBT movie I reviewed, “Saving Face,” this one is about coming out to yourself and to the world. But this time, the place is working class London and the romance is between two young men.

Jamie (Glen Berry) is a quiet, shy lad who ducks out of sport at school and lives in a council flat with his 30 something mother Sandra (Linda Henry). On either side of them are Leah (Tameka Empson) who adores the music of Mama Cass – and tends to play it at all hours and at top volume – and Ste (Scott Neal) who is the same age and more social adept but who also gets beaten by his brother and drunken father seemingly just for the hell of it. Out of pity, Sandra will let Ste stay overnight at her flat which is how the boys first begin to realize that their feelings for each other might go beyond just being friendly neighbors. But do they have the courage to admit these growing feelings to each other, much less to a world that might not understand? Or approve.

The groovy opening music of Mama Cass lets you know what the soundtrack for the movie will be like. At first I wasn’t too sure but by the end of the film, I was starting to think about buying it. Even if you don’t care for these songs, just sit and listen to the lyrics. They are almost eerily perfect for what’s going on onscreen. There is one additional song in the movie but not on the soundtrack or sung by Cass which made me smile and then nod my head at its inclusion: “Sixteen Going on Seventeen” from “The Sound of Music” with its line “I’ll take care of you.”

The subject matter is serious and never treated lightly though there are comic relief moments mainly provided by Leah. But even she has a darker undercurrent as a woman with little hope for anything different in her life than what the housing project offers. However, the main emphasis of the movie is the relationship with Jamie and Ste and between Jamie and his mother.

I found it interesting that the loner and socially clumsy Jamie is more sure of and ready to take a chance on their relationship than Ste. Maybe because Jamie had little to lose and wasn’t afraid of his mother whereas Ste was already bruised and beaten down by his family and stood to be shunned by those he knew. And it’s not just a hard life for Ste. Everyone there fights for every inch upwards in life.

Director Hettie Macdonald doesn’t hit you over the head with the story nor use heavy handed tactics to make a point. The feel of the film isn’t preachy at all. It’s not a depressing downer but is fairly blunt about the battles the characters are fighting. And it’s not pro m/m at the expense of f/m or anything else/anything else. To me, the message seems to be ‘what’s right for you is right for you.’ The film has an R rating but I think that’s mainly due to the fact that it’s m/m and has strong language. If it were about f/m young love, I doubt the rating would be that restrictive since the love scenes are tame.

There are some wonderful scenes to watch out for including Ste and Jamie running through some woods and sharing a hot kiss to “Make Your Own Kind of Music.” Sounds silly when I describe it but on screen, it’s magical. Then when Sandra confronts her son with her new suspicions about his sexuality and he confirms them, she’s stunned. But instead of rejecting him, she pulls him into an embrace and comforts him as he cries. She then says something like, “Did you think I would put you out in the morning like an empty milk bottle?” It’s heartbreaking and uplifting at the same time. Jamie is still accepted by her but how many others aren’t so lucky?

One section that didn’t seem quite right to me is the scene where Jamie and Ste go to a gay bar. Here they are, teenagers, in a bar filled with older drag queens and the impression I got is that the two boys think they’ve found their new home away from home. Really? I also wish that Jamie and Ste had been a little more fleshed out as characters. Sandra and Leah are more vibrant than either of the boys individually.

The film ends in a HFN. The final scene is, maybe just a touch, unrealistic with the public dance and embrace between the two lads – since some of the neighbors are obviously shocked and Ste’s family still doesn’t know. It’s definitely not going to be all fluffy bunnies and sunbeams from here out despite the fact that we aren’t going to see any of this. But Sandra and Leah’s final show of support for Jamie and Ste is fabulous. Sandra is a tough woman and what she does and how she does it is totally in character for her but it still brought a tear to my eye. If it could only always be that easy for those facing coming out and being truthful about who they are. B