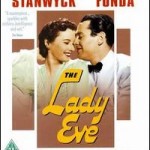 For some reason I’d missed watching this movie until recently. Preston Sturges films either work well for me or bomb and after a miss with “Christmas in July,” I hesitated on trying “The Lady Eve.” Now that I’ve seen it, I wish I’d watched it years ago but still have a few tiny niggles about it.

Wealthy heir to an ale fortune Charles “Hopsie” Pike is returning home – amazingly fever and parasite free! – after spending a year in the Amazon studying snakes. He catches up to a cruise ship traveling between South America and New York on which is the card sharp team of “Colonel” Harrington (Charles Coburn) and his daughter Jean (Barbara Stanwyck). The two cheerfully plot how to bilk Pike of as much money as possible while the third member of the team Gerald (Melville Cooper) is assigned to watch out for Hopsie’s “minder” Muggsy (William Demarest).

Unsophisticated Hopsie is putty in Jean’s hands and soon she’s got him on the romantic ropes. Having fallen in love with her mark, she tries to keep her father from taking any more money from him and plans to confess all after they dock and before marrying Pike. But a suspicious Muggsy fingers the con team and tips Hopsie off. Furious at being swindled and thinking Jean is just after his money, Hopsie turns her away as she tries to explain. The boat docks in NYC and the pair separate.

But when they run across an old friend and fellow con artist named Pearlie, who’s currently playing an English aristocrat and ingratiating himself into swanky Connecticut society – where the Pike family live – Jean sees a chance to get a little of her own back.
Posing as “Sir Alfred McGlennan Keith’s” niece “Lady Eve Sidwick,” Jean manages to hoodwink Hopsie again. On the wedding night, she exacts her revenge by “confessing” to a series of affairs and an early marriage. Finally disgusted with the sheer number of men she claims to have “known,” Hopsie jumps the train. But with the whip hand in the relationship and divorce proceedings, Jean realizes she still loves Hopsie. Will she be able to get her man a third time?

Barbara Stanwyck is gorgeous to watch twisting Henry Fonda around her little finger – three times. He’s a bit wooden but then his character is supposed to be so, okay. Charles Coburn is perfect for the swindler father while, if you’re a fan of 30s films, you’ll probably recognize Melville Cooper, Eric Blore, William Demarest – who was also in other Sturges films and the later long running TV series “My Three Sons,” as well as Eugene Pallette who does his usual High Society father role.

The scene of Pallette out on the patio waiting for his breakfast from the overtaxed staff who are scurrying to prepare for a party and finally having to resort to using the covers of the empty silver serving dishes as make shift cymbals is hysterical. Also watch for the scene of Demarest peering at “Eve,” who he immediately knows is Jean, through the windows of the mansion until he trips and falls in the bushes. His is the Cassandra chacacter who knows the truth but can’t get anyone to believe him.

The first half of this movie is dynamite. The dialogue is witty and funny enough to have me laughing out loud. The double entendres are razer sharp and, as usual, Sturges sees how far he can go to poke at the Code restrictions in effect for Hollywood movies. It’s fun to watch for the cadre of actors with whom Sturges loved to work and for the trademark “overlapping dialogue crowd scenes” that he put in so many of his films. I also adored the twist in the usual dynamics which has Jean being the con woman and more sophisticated character while Hopsie is the naive, gullable one.

It’s the second half of the film that gives me problems. The tone shifts to slightly darker as Jean plots and carries out her revenge. Before it wasn’t personal as the cons set out to fleece Hopsie but in this half, it is and it makes Jean much less likable to me. It’s also the section of the film filled with pratfalls – all of them of Hopsie tripping over things, getting things dropped on him or slipping in the mud. I know it’s part of the “screwball” genre but it seems too much in such a short amount of time and I got tired of it.

This section also requires some suspension of belief so that the viewer can swallow the fact that Hopsie doesn’t immediately know Jean=Eve the way Muggsy does. Sturges does build in some doubt on Hopsie’s part which he then argues away. The script also has a story told to Hopsie by Pearlie to help things along but all this contrivance doesn’t jive with the seamless smartness of the first half. The one part that does work well for me is “Eve’s” confession while on the train on their honeymoon night. Sturges brilliantly intercuts it with shots of the train roaring faster and faster – almost out of control – as “Eve” piles on her revenge. Stanwyck is fantastic to watch here. The ending leaves me slightly dissatisfied in that it makes Hopsie look like even more of an idiot. Perhaps he has already caught on – some facial expressions of his make me think he’s at least wondering – but he just never seems Jean’s match in intellect or quickness.

Still, the amazing beginning of the film is enough to cancel out at least some of my issues with the rest of it. While it won’t be my favorite Sturges film, it does show his blend of cynicism and sentiment as well as giving me a chance to see some more of my favorite character actors in wonderful roles. B