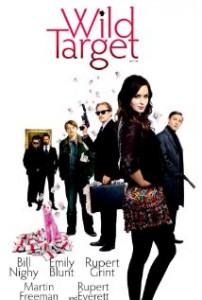 “I love you, Victor Maynard.” – Roger, a parrot

It’s got a hit man, an inept thief, a forged Rembrandt, a lost young man, the second best assassin in the business, a mother with high standards, a pink cat, a stolen bullet strafed car and a lesson about cleaning your gun. What more could you want in a film? Victor Maynard (Bill Nighy) is 54 years old, the best assassin in the business and assigned to kill Rose (Emily Blunt) who pulled an art heist fast one on Mr. Ferguson (Rupert Everett) a ruthless real estate tycoon. But as Victor follows her – do I see a smile? Yes, I do – he is intrigued by her free and easy “all for me” ways and doesn’t pull the trigger. As his exacting mother tells him, in order to restore the family reputation, he needs to finish the hit. But when he goes after Rose again, it’s to discover that someone else has been assigned the job. Ferguson’s bodygoons botch the business and Victor, Rose and Tony (Rupert Grint) – a young man who witnessed the whole thing – find themselves on the run from Dixon (Martin Freeman) the second best assassin, now hired to kill them. Can Victor stay one step ahead of Dixon, instruct Tony as his new apprentice, win the girl and get his mother’s (Eileen Atkins) approval of her? Bill Nighy’s movies either work for me or spectacularly don’t (Glorious 39, Pirate Radio). In this case, like “Love Actually,” it works brilliantly. Here he plays Victor, a man as stiff as a board, who shrink wraps his furniture – and I don’t just mean the upholstered pieces – but who can give a mean foot massage and who looks after his mother. It’s a joy to watch him slowly thaw even as he’s trying not to strangle Rose who is unlike anyone in his life, ever. Emily Blunt plays Rose as someone who in a romance novel would be described as delightfully infuriating. Just watch her larcenous stroll down a street market or listen to her droll sarcasm and shoulder shrugging nonchalance in the face of Victor’s uptight efforts to keep her alive. But she wakes Victor up and makes him question where he is in life. Then “just enough” happens to make her fall in love with him. Rupert Grint is sort of a Robin to Batman in the movie. Grint gives Tony a youthful, earnest enthusiasm that also catches Victor’s interest and in a way he becomes almost the son to Victor’s father figure. He and Rose get to squabble like children as they both breathe life into Victor’s up-til-now quiet life. Eileen Atkins is brilliant as usual. I love this woman in almost everything I’ve seen her in. She’s determined that the family standards be maintained and don’t underestimate her with an eight inch knife or a gun. Rupert Everett is delightfully sinister as the thwarted tycoon who is more dangerous than the goons around him. As Dixon, Martin Freeman is given a lesser role and unfortunately, I don’t think as an assassin he’s nearly as interesting as Victor. Though his goon is quite funny at times.

There are so many moments in the film I love. Listen out for some football commentary which also applies to what’s going on between Victor and Rose at the moment. And watch for the crib mobile that Victor’s father made for him and the parrot who overhears too much. And definitely pay attention to the French phrases Victor is practicing – not only are some hysterically funny in relation to his hits but they’re also poignantly telling of his emotional state. So should a hit man, a thief and an apprentice hit man be rewarded in the end with success and the beginning of “one big happy family?” Oh, yes indeed. I might wish that the deus ex machina wasn’t as blatantly telegraphed, that Grint weren’t quite so clueless at times, that the second best assassin had as much flare as Victor and that there was a commentary tract – this movie just cries out for one – but overall I’ve enjoyed it each time I’ve watched it. B+

→ Jayne
Previous article: Review: Seeing Spots by Ellen Fisher
Next Post: DUAL REVIEW: In the Arms of the Marquess by Katherine Ashe