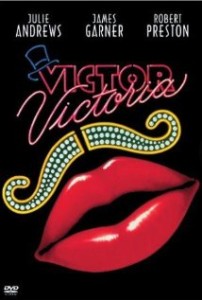 Victor/Victoria has long been a favorite of mine for many reasons. It’s got a cast crammed with fantastic actors who inhabit their roles like a second skin, it’s funny, it’s poignant and it’s got Julie Andrews’ voice and Henry Mancini’s music all through it. The movie also has a favorite director of mine at the helm in Blake Edwards – who was also Andrews’ husband though he accorded equal care to all the cast and crew. It also features transvestitism and an openly gay character in a lead role in a major Hollywood film in 1982.

Based on the German movie “Viktor und Viktoria,” it’s the early 1930s in Paris and singer Victoria Grant (Julie Andrews) can’t get a job to save her life. Her audition for a nightclub job shows that the owner wants something “different” instead of just a good female singer. Carole “Toddy” Todd (Robert Preston) sees and hears her but soon has his own troubles when a tussle with scorned lover Richard (Malcolm Jamieson) causes a melee that wrecks the nightclub and gets Toddy fired. Victoria and Toddy hilariously cross paths in a shabby restaurant then escape into the rainy night. Victoria’s shrunken clothes and need to borrow some of Richard’s inspire Toddy with the perfect plan to launch her new career and make them both rich.

Toddy transforms Victoria into “Victor,” a gay, Polish Count and then sells the persona and “his” talent to agent/nightclub owner Andre Cassell (John Rhys-Davies). Victor makes a stunning debut to Paris and to Chicago nightclub owner King Marchand (James Garner), his moll Norma (Lesley-Ann Warren) and bodyguard Squash (Alex Karras) who are in the audience. King is slightly skeptical but goes along with things until he begins to have feelings for Victor and decides to uncover the truth.

Ridding himself of Norma – who proves the adage “hell hath no fury” – he and Victoria start a relationship – which in its first misunderstood night causes Squash to believe King is gay and allows the bodyguard to finally come out, himself. But their cross-purpose feelings about women/men and traditional roles plus Norma’s revenge plus the first nightclub owner’s suspicions about the impersonation being perpetrated by Victoria might end up bringing down the curtain on Paris’s hottest act in ages.

The design of the opening credits immediately gets me in an Art Deco mood which is furthered by the wonderful sets and costumes built for the film. It was all filmed on two sound stages which gives the movie a lovely, closed, slightly otherworldly feel. I think this helps keep the illusion of the gender switch going. Edwards was the writer as well as the director and the script is witty and warm. He keeps the action going, easily slipping from a mix of mayhem to quiet moments of thoughtfulness. Edwards also includes some of his trademark scenes in snow, characters hiding in closets, at least one character suffering from damaged fingers as well as a “musical rooms” mix up.

I love the subtle humor of one scene in particular where a starving Victoria watches through a window as a fat man stuffs an eclair into his mouth. The next shot is in reverse, looking out from the restaurant, and it’s not until a crowd begins to gather and someone helps her up that we realize she’s fainted. A later scene wherein Victoria plans to dump an enormous cockroach into her salad and thus avoid paying for two entrees for herself and Toddy, goes horribly awry when the offending insect scampers away while she argues with the manager only to have it crawl up another woman’s leg sending her – and the entire restaurant – into screaming, stampeding fits – all witnessed from outside, across the street, looking in through the plate glass windows. We can see all the mounting, spreading hysteria without Edwards having to cut at all.

That scene also introduces one of my favorite minor characters of the movie – a waiter played by veteran English actor Graham Stark who has a deadpan, satirical delivery of his lines that has me in stitches. His facial expressions are also priceless and get repeated in two more scenes where he crosses paths with Victoria as he attempts to figure out why she looks so familiar and remember how he knows her. One word, yelled during the second mass fight scene of the movie, announces that he’s made the connection.

Karras and Warren are great in their secondary roles. He’s a gentle, teddy bear – much like he was as Mongo – who surprises his boss with the knowledge that gay men don’t all act alike. She’s a tough, hard eyed woman who’s obviously come up from very little and who isn’t about to lose her meal ticket to “some Polish fairy.” Watch for how she eats her bonbons and discards the rejects. She also gets to show off her singing and dancing skills in a sexpot number that would have her “Cinderella” character fainting dead away. John Rhys-Davies looks pretty good and does a workmanlike job but doesn’t have the lines or flashy character that the others do.

Julie Andrews is lovely here and her voice is still in top form. She and Garner still have great chemistry together as well as some dialogue that allows them to discuss the freedoms and limitations that gender demanded and forced on men and women then. Garner really helps sell the premise of the film, that to the general public, Victoria is a man, by his reactions to her. At her initial show, he’s impressed with her singing then stunned at the reveal after which he’s confused at his reaction to “Victor.” Once he knows the truth, we can see his admiration for her performance at Chez Lui. King Marchand truly does get his views on his world turned upside down by the events in Paris. But it’s Robert Preston who truly steals my heart here. One of the highlights of the film for me is the relationship that Toddy and Victoria have. At one point a still masquerading Victoria tells King that she and Toddy love each other and I feel that they do. Not in a stereotypical “Gay Best Friend” way but as two people who deeply care about each other. He also brings down the house with his (one take) version of, and witty comments about, a musical number done earlier by Victoria.

If the film has a weakness, it’s in the last act which drags on a bit with a montage of King and Victor in/at various locals and events. While this does show that manly man King was in love enough with Victoria that he was willing to allow the public to think him gay in order to let Victoria maintain her lucrative job, a few seconds cut here or there would have sped things along. There’s also a reprise of Victoria singing the end of the same number (which was long enough the first time) that we’ve already seen before.

Still it’s a musical for people who don’t like traditional musicals where characters suddenly burst into song while speaking. Here the songs are supposed to be part of stage performances which makes more real life sense. The costumes and sets are top notch, the acting is universally good and the feeling I’m left with is warm and affectionate towards all. B+