Undertaking Betty (aka Plots with a View) (2002)
Genre: Romance/Black Comedy
Grade: B- 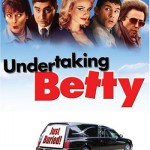 I like Brenda Blethyn, Alfred Molina, Christopher Walken and Robert Pugh and the premise sounded fun so I rented this from Netflix not expecting more than an enjoyable hour and a half of entertainment. That’s about what I got. However it’s a cute film and if you’re looking for a popcorn movie, it’s a good choice.

“A woman (Brenda Blethyn) who’s husband (Robet Pugh) is cheating on her and an undertaker (Alfred Molina) who’s in love with her for ages, decide to fake her death so they can be together. However, the other town’s undertaker (Christopher Walken) who loves over-the-top funerals complicates things.”

At first, Betty comes off as a bit of a ‘put upon’ older wife. Her dictatorial husband Hugh married her for her money and because she was the daughter of the town mayor but has obviously never loved her while Boris Plots, as we see from the opening flashback, has loved her from afar for over 30 years. The two share a love for ballroom dancing and have even named their cats Fred and Ginger but it’s not until Hugh’s mother dies and her burial service is done by Plots that Boris finally works up the nerve to tell Betty how he feels.

But Betty feels horrible at the thought of publicly leaving Hugh so the two cook up the scheme for Betty to ‘die’ and Boris to handle the funeral after which the two of them will be free to run off to Tahiti and ballroom dance to their hearts content. Unfortunately the other undertaker in town sticks a spanner in the wheels when he first tries to underbid Boris to handle the funeral, mainly for the publicity of burying the mayor’s wife, but later is so taken with how lifelike Betty looks at the funeral viewing that he just has to learn Boris’s trade secrets. Then Betty learns, during hilarious open coffin viewing confessionals by her cheating husband and his tramp-y mistress, of his long term adultery and she decides she just has to get her own back before leaving with Boris.

The movie has several Hollywood spectacle dance numbers for Molina and Blethyn which make them look pretty good as they hoof it up. There’s a funny comment in the featurette bonus from Molina about the horror of watching himself practice in a dance studio lined with mirrors. The fantasy funerals offered by Walken’s funeral parlor are just as funny (his motto is to put “fun” back in funerals) and include a Vegas style show funeral and Star Trek tribute that goes horribly wrong.

Walken’s attempts to learn what ‘special fluids’ Boris used to make Betty practically glow in the coffin (her husband says she hadn’t looked that good in 15 years), are hysterical. Watch for the scene where he and his assistant break into Plots and discover that Betty’s still alive. Betty’s revenge against her husband and his mistress goes slightly overboard but given the fantasy nature of the dance numbers it’s not too bad and has its funny moments.

“Undertaking Betty” is cute and as the film progresses, I found myself cheering for Betty and Boris to get their HEA, which we see as the film closes. Even Fred and Ginger share in the final dance number and we’re also shown how Betty gets her own back from Hugh while rewarding those who had been kind to her. It’s utter fantasy and a bit silly in places but also a sweet second chance at romance. B-