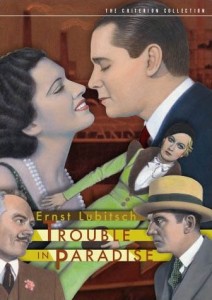 The first time I watched “Trouble in Paradise” I fell in love with it. It’s smart, sophisticated, cultured and urbane. And it’s about two crooks who meet, fall in love then take advantage of a situation to instill themselves into the household of a wealthy widow in Paris, planning to take her for all they can get.

The action opens in Venice but not the way such openings normally happen. Instead of a shot of the Piazza San Marco or the grand canal we get….well I won’t spoil the surprise but it’s a classic example of the way Lubitsch tried to turn things on their heads and give the audience something different. The next scene, of a handsome man planning a dinner party for two, tells us that romance is in the works along with – again – something different.

Our first view of Lily (Miriam Hopkins) seems off. Something’s wrong in the way this woman is obviously overplaying her lines. But it’s the director’s way of showing that what we’re seeing isn’t the truth. Then in a shocking turn the handsome man we met earlier calls her a thief. But it’s okay since he, Gaston Monescu (Herbert Marshall) is one too. As the dinner progresses, these two seduce and woo each other by revealing what each has pickpocketed from the other. It’s love at first sight.

The action skips a year then introduces the second woman of the plot via Lubitsch’s take off on the overwrought radio ads of the time. Madame Colet (Kay Francis), of Colet and Company has too much money for her own good and no head for business. But she’s so generous with her wealth that we can’t help but like her. When she thinks she has lost an expensive handbag at the opera, she posts a reward that brings our two con artists – who stole the bag in the first place – into her life.

We then get to watch suave Gaston in action. He’s all charm and Continental sophistication from his command of languages, knowledge of women’s make-up and – guess what? – head for business that Madame Colet soon has him working as her man of business even as she tries to seduce him.

But there’s trouble in paradise as a former mark of Gaston’s, and current co-beaux of Colet’s, puzzles out where they met. Will the truth come out? And whom will Gaston pick as the closing credits roll?

The movie is only 82 minutes long but it’s not a problem as Lubitsch didn’t clog up with works with extraneous subplots. The need to make sharp cuts to hide Marshall’s limp moves the action even faster. And what a delightful example of sexual attraction we get in this pre-code era. It must have been charmingly shocking in its day. Here’s a man who is obviously living with one woman and attracted to another. But as their final scene together shows, Gaston and Madame Colet are regretful but accepting of the reality that Gaston is fated to stay with the one woman who not only loves that he’s a crook but who is one of equal skill herself.

The film is art deco and Bauhaus galore. Its characters are dripping with money in a time when most of the world wasn’t but it gave audiences a chance to fantasize for a while and somehow managed to make them still like this wealthy woman who tossed money around like confetti. That must have been almost as criminal to the viewers of 1932 as Gaston and Lily’s cons and thieving. In fact, there’s not but one character I disliked and that was because of his hypocrisy. There are two other characters, the co-beaux, whom I adore.

This is not a frantic screwball comedy. Instead it is a measured, delicious, shimmering comedy of manners. I think it benefits from repeated viewings and the Criterion DVD I have includes an intro from Peter Bogdanovich (is he doing anything but these intros now?) along with commentary by Lubitsch’s biographer which shines light on the evolution of the film and of the times in which it was made. Give it a try and see one of the best examples of “the Lubitsch touch.”

→ Jayne
Previous article: Thursday News Thread: Penguin and Amazon Have Kissed and Made Up
Next Post: REVIEW: Magic Bleeds by Ilona Andrews