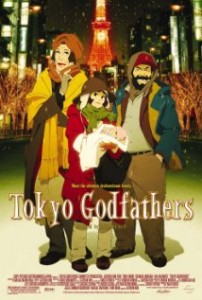 Looking for a Christmas themed movie that’s not gushy or overly sentimental? Or do you like anime? Then check this one out. Three homeless people, an abandoned baby and it’s Christmas in Tokyo. Ho, ho, ho.

Gin – a middle aged man who takes refuge in drink, Hana – a former drag queen (I was surprised that in Japanese the term “drag queen” is exactly the same) with delusions of motherhood and Miyuki – a tough, usually sullen runaway teenager hang together on the streets and back byways of Tokyo. It’s not easy being homeless (another term that’s been adapted “as is”) anywhere. Taking advantage of a sermon/supper/Christmas church performance, they finally get a hot meal one evening which just happens to be Christmas Eve. Afterwards, they head out to check through the trash near where they’ve fashioned a place to stay and hear the sound of an infant crying. Tracking down the noise to the source, they discover a newborn girl, wrapped in blankets with a note asking for someone to take care of her. Hana is ecstatic as he’s always wanted to be a mother. He immediately names the child “Kiyoko” since she’s pure and has come to them like an angel. First Gin and then Miyuki argue with Hana that they can’t keep the child. They live on the streets, have no access to formula and anyone hearing a baby crying on the street will investigate thus getting them into trouble. But Hana will listen to none of it. Kiyoko is a gift from God and he’s not turning her over to parents who abandoned her. It’s here that we begin to be given glimpses of the three main characters’ past lives. Hana appears to know a lot about living in foster care and is determined this child won’t suffer that fate. Gin talks about how his daughter died from an illness and he abandoned his wife due to the stress. Miyuki sees someone on a passing train who causes her to bolt.

Reluctantly, Gin and Miyuki fall into step and start to look after Kiyoko, shoplifting some baby formula and taking turns holding her. The discovery of a locker key in the blankets leads them to find a suitcase with more information about the parents and they head off to a Tokyo nightclub where they think the mother worked. There’s a mafioso wedding going on which leads to an assassination attempt after which the gunman takes Miyuki and the baby hostage. He flees the scene with them but Gin and Hana are hot on the trail. Or are until Gin gets discouraged and begins to drink causing Hana to abandon him and search alone. Gin gets an idea of what his life might become when he runs across an elderly, dying, homeless man. Then faces off, and gets the worst of, a bunch of young thugs who beat him almost senseless. Meanwhile, Hana calls the cab company that the shooter used in the getaway and gets the same cab to respond to where he is and then let him out where the shooter left it with the hostages. There he discovers not only Gin, who’s been taken in by the residents of a gay nightclub but also Kiyoko and Miyuki who were with a Spanish speaking mother who nursed the baby. At this point the assassination subplot completely disappears.

Hana used to work at this club and gleefully catches up with the people there, discovering that the fight he was in with a patron there, that he imagines would bare him from working there again, was smoothed over ages ago. But a TV broadcast that talks about the baby lists her as abducted from a hospital and even Hana finally admits that she must be returned so off they go again. It’s then that I kind of lose track of the plot a little. The three end up where the parents of the child lived only to discover the house is literally pulled down and the neighbors have no idea where they’ve gone. Eventually Gin finds the father who has abandoned both his wife and the baby. Then Hana falls sick and while in the hospital, Gin meets someone from his past who seems willing to forgive him. Meanwhile Miyuki is shown holding part of a classified ad that tells her all is well at home and begs her to come back.

Are we finished yet? Oh, no there are still a few things left that our intrepid band go through before Kiyoko is reunited with her desperate parents who then name Hana, Gin and Miyuki as her godfathers (or godfathers plus godmother). The last part goes off the rails and slightly out of control but then ’tis the season of miracles and miraculous saves. In a way, the film is a little bit like “A Christmas Carol” in that the characters think about their pasts, discover events of the present and get glimpses of possible futures. Toss in a touch of “3 Godfathers” as well. It’s definitely not a happy, happy movie filled with schmaltzy joy. It is a fine film of redemption, putting the needs of others over your own and getting a shot at second chances. Kiyoko might start out as an annoyance to Gin and Miyuki but as the film progresses, they become like Hana in feeling that they’ll do anything for her. She is innocence and purity and truly a gift to them from God. She makes them want to be better people.

There are some things I’m not sure about. The whole subplot of the Spanish speakers who are described as foreigners, one of whom shoots the crime syndicate boss, left me bewildered. Maybe it wasn’t explained much because it was only a mechanism to advance the plot as needed or perhaps I lack the relevant cultural knowledge to make sense of it. And the final climax of the action sequence has always stuck me as going one event too far. Oh, well… The humor ranges from subtle to slapstick and is inter cut with the drama of Gin, Hana and Miyuki’s lives. They are not perfect people. They’ve all made mistakes yet their hearts end up being in the right place. The film ends with each of them meeting up with people who love and care for them. There are no stated happy endings but there are possible positive endings for all three.

If you’re tired of watching the standard Christmas offerings or the sugar overload from some of them, look into “Tokyo Godfathers” for a refreshing change of pace. B+