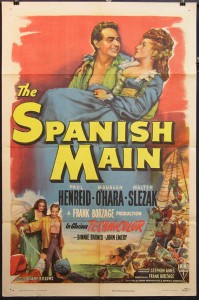 After my review of “Captain Blood,” I began looking back into my pirate movie collection for another one to write about. Here’s a lesser known swashbuckler from the golden days of pirate movies complete with a Dutch pirate hero and a woman pirate!

Dutch Captain Laurent Van Horn (Paul Henreid of Casablanca fame) is a peaceful man on his way, along with other Dutch settlers, to the Carolinas when a hurricane (and that must have been some hurricane!) blows their ship off course to Cartagena. Here they are imprisoned by the evil Viceroy, Don Juan Alvarado (Walter Slezak). Vowing vengeance, Laurent escapes along with some fellow prisoners.

Five years later, we learn that Laurent is now known as the uberpirate Barracuda who takes Spanish ships and steals from the Viceroy at every opportunity. In disguise, he and some trusted men are sailing on the ship which is carrying the Contessa Francesca (Maureen O’Hara, looking very Irish for a Spanish lady), the daughter of the Mexican Viceroy, to her wedding with Don Alvarado. Naturally she and Laurent meet = sparks and attraction! The Barracuda’s ship engages the Spanish one and of course we know who will win. In order to avoid more bloodshed, Francesca agrees to marry Laurent, who is strangely eager to tie himself in marriage to this spitfire. Oh well, every man has his weakness.

Arriving in Tortuga, the headquarters of the Brethren of the Coast, Laurent announces his plans to ransom the other Spanish prisoners but his marriage, and the fact that it will bring Don Alvarado and the might of Spain against the pirates, divides his fellow buccaneers. One of these pirates is Anne Bonney (Binne Barnes). Whoo-hoo, women pirates! She and Francesca even fight over Laurent. Whoo-hoo, cat fight! Of sorts.

Laurent’s fellow pirates decide that the best thing for all concerned is to return Francesca to Don Alvarado. In the process, they turn the two, who had begun to trust each other, against each other. So, Laurent is held captive until they make off with his ship and his wife. They didn’t count on the evil Viceroy ignoring any piddling matter of honor (honor for pirates?!) and taking Laurent’s crew captive. But Laurent isn’t a man to give up what is his so he sails after them, determined to get Francesca back. Will he be able to save the day against the might of Spain?

There are plot holes all over the place with this one so my advice is just to ignore what doesn’t make sense and check out the glorious Technicolor. Maureen O’Hara never looked lovelier and is given plenty of scenes to wear dazzling green dresses which set off her hair. There’s also a beautiful sunset, with the Barracuda’s ship sailing into it, which ends the movie – even though a moment before it was full night. Remember I said plot holes?

The fight sequences, both at sea and on land, are fairly well done complete with a soaring score filled with violins. The Spanish are evil incarnate, though Don Alvarado actually ends up almost endearing himself to me with his flexible notions of honor and ruthless selfishness. Here’s a guy who truly looks out for numero uno.

Paul Henreid acquits himself well though it’s obvious that he’s not in the same fencing class as Basil Rathbone and Errol Flynn. Still, he looks like he’s having fun and is given some good ‘leading man’ lines to riposte against his enemies. Maureen O’Hara starts out as a feisty maiden, even managing to spring the pirates from the dungeons and save Paul while he’s fencing for his life. I just wish that towards the end of the film she hadn’t been required to collapse and hang onto Paul a lot.

“The Spanish Main” is obviously RKO’s attempt to cash in on the popularity of pirate films. While it’s not up to “Captain Blood” standards, it’s a solid, workmanlike entry to the genre and not to be missed by swashbuckling fans. Handsome Austrian Henreid and beautiful Irishwoman O’Hara look great together. Since Henreid’s character stars out as a wronged, innocent man, we feel free to cheer him on. Plus there are the obligatory pirate sidekicks to add a dose of comedy when needed. A female pirate (yeh!) and villainous villains complete the picture. While it’s not the best, it’s still of the kind “they just don’t make anymore.”

Note: I can’t find any official DVDs of this movie but it is being shown on TCM in a few days according to their schedule.