NOTE: This one has a bittersweet ending. If you’re okay with that, read on.

At Susanna Kearsley’s urging I put this one in my Netflix queue months ago where it lingered and lingered. And lingered. She gently goosed me a bit about it in a comment on one of my reading/watching lists and I thought, “Gotta finally get off my ass and move this to the top of my queue.” At long last I did and now can say, “Thanks, Susanna. Good rec.” It’s 1953 and Charlie Halliday (Barry Pepper) is a brash, arrogant bush pilot in the Northwest Territories (Canadian Arctic). He’s young and thinks he can do anything which leads him to get sloppy and do something stupid. While out on a run, he goes off his flight plan. After meeting a small, nomadic family of Inuit, he’s persuaded to take a young woman Kanaalaq (Annabella Puiguttuk), whom he suspects has tuberculosis, back with him to Yellowknife where she can be seen in a hospital. But when the plane develops engine problems and crashes, leaving them stranded out on the tundra with no radio, few supplies and winter on the way, Charlie learns that his modern means of survival aren’t going to get him far. He has to overcome his prejudices and learn from Kanaalaq for either of them to have a chance of making it.

Right now, this can be viewed by streaming at Netflix but I would urge people to rent it so that you can see the cast interviews and “Making of” featurette which gives a good 40 minutes of behind the scenes glimpses of how the film was made and what the cast and crew had to endure while doing it. Polar bears, Biblical swarms of mosquitoes and winter scenes that were shot in -28 C (-18 F) with wind chills going down to -45 C (-49 F) were only part of it. This was one dedicated group of people. Director and co-writer Charles Martin Smith worked with author Farley Mowat to adapt Mowat’s book “Walk Well My Brother” and everyone was on board for as much location shooting as possible. 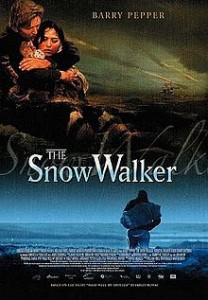 Barry Pepper is an outdoors man himself and does a good job showing us Charlie as he’s broken down and then built up again – this time into a far better person. Charlie starts out as a bit of a prick with the patience of a two year old when things initially don’t go his way. The film belabors this perhaps a bit too much and as Kanaalaq watches and listens to Charlie going off the rails yet again, I could sympathize with her realization that she’s stuck with this moron and has to be the responsible one at first. Annabella Puigattuk was chosen for the lead role because her acting ability and also because her first language is Inuktitut, she can fish, hunt seal and walrus and make clothing out of caribou hides. She’s natural and charming and if I were faced with surviving the winter in Nunavut, she’s who I’d choose to be with. The Inuit culture is treated with respect yet also not glorified or condescended to. As the film shifts to watching her go about hunting and fashioning better clothes for Charlie, it pares down the melodrama and becomes a thing of sleek beauty. As I said earlier most if not all of the outdoor scenes were shot on location and though there are some scenes of Charlie’s fellow pilots before he crashes and afterwards as they try and find him, most of the movie is Charlie and Kanaalaq out on the tundra. Naturally Pepper and Puigattuk needed good chemistry to pull it off and luckily they have it by the bushel. This is a quiet film that is allowed the time to slowly build and flow. It doesn’t go for spectacular crashes or unrealistic survival scenes. Don’t expect to see Charlie and Kanaalaq fighting for their lives against polar bears or wolves. Instead look for the poetry and sparse grandeur of an unforgiving land that will kill almost as quickly. The final scenes of Charlie seeing to Kanaalaq’s needs in the afterlife then staggering out of a snow storm towards a group of Inuit – and watch how this is beautifully underplayed – will stay with me and are more powerful than lots of what I’ve seen in big budget movies that go for cheap emotion backed by soaring violins. You might have to look a bit to find this one but the effort is worth it.